The cultural and creative industries play an important role in the modern economy of cities, particularly big cities, as they contribute in shaping the urban landscape. Cultural activities have coalesced in Athens, for a number of reasons, among which are the large population size, the specialised workforce and the availability of intermediate goods. Theatres play a significant role in cultural activities and their dynamic growth was not interrupted by the current socio-economic crisis. It is characteristic that the number of theatres in Athens grew by 153% during the period 2000 to 2014, while 70% of theatres operating in 2014 were established after the recession set in (2008). 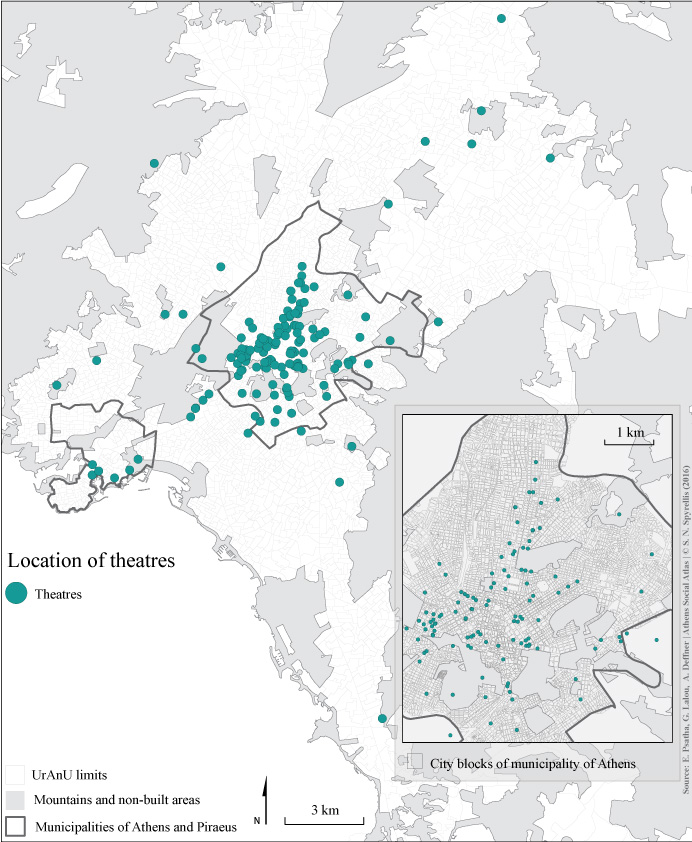 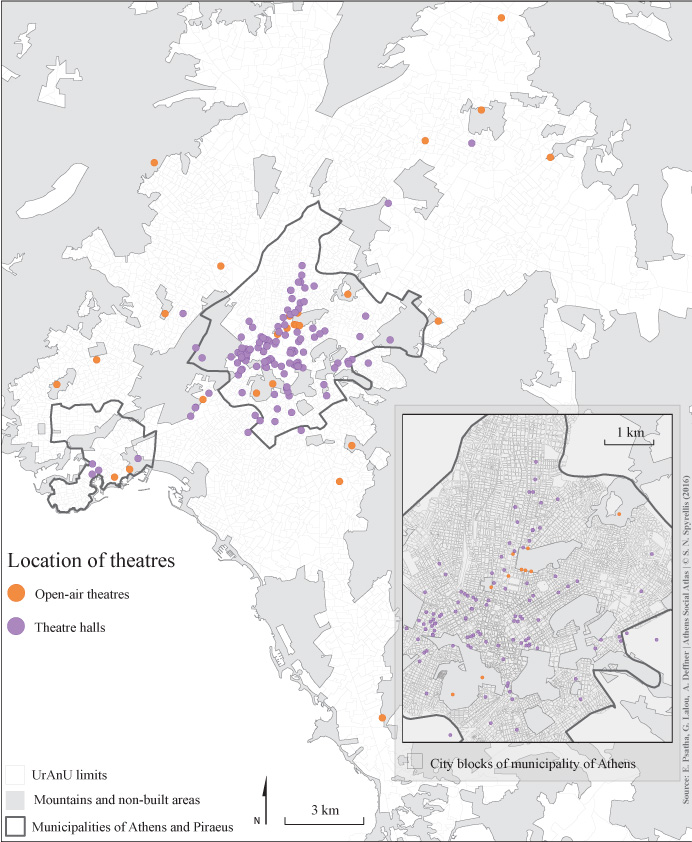 Map 2: Location of theatre halls and open-air theatres in the Greater Athens area

Today in Athens, there are 152 theatre halls [1]. Their year of establishment is not related to the year of the building’s construction; in many cases they occupy old but refurbished premises. This practice is most common in newly-established theatres, since they tend to cluster in areas with a large concentration of listed buildings. Specifically, 17% of existing theatres were established before 1980, 26% were founded during the 1980s and 1990s, while 57% were founded after 2000. Renovations of old theatres and the construction of new ones throughout the Municipality of Athens have already formed a special and dynamic theatre cluster, which is still growing.

The following spatial trends have developed during the 2000-2014 period, when theatre activity dramatically increased:

These trends are due to several factors. In Gazi, Metaxourgeio, Kerameikos and Votanikos, the opening of theatres was favoured by the building stock, mainly comprising industrial buildings, cheap rents and close proximity to the centre of Athens (Avdikos 2014). The image of those areas was enhanced, following their revival in the 1990s and in particular after a particular audience was attracted to the Gazi area. The favourable environment for attracting cultural activities was boosted after Technopolis opened to the public in 1999 and the new underground station of Kerameikos was built in 2007, . In Neos Kosmos, an important factor for the increase of cultural activity, theatres in particular, was the opening of the “Onassis Cultural Center” in 2010. It is significant that three new small theatres opened in the area that year.

In Tavros, new theatres started springing up after the “Michalis Cacoyiannis” Foundation and the Foundation of the Hellenic World Cultural Centre located there and Piraeus Street was promoted as a new dynamic cultural hotspot in Athens. The clustering of theatrical enterprises and the development of the theatre sector in general, cut down operating costs for theatrical enterprises, and created the conditions for strengthening the sector further (Αυδίκος 2014). The shift of the business model towards a multitasking actor, who doubles as a director – businessman (not necessarily in the same play), also contributed to that direction.

These findings do not apply to the open theatres of Athens, as their locational trends between 2000-2014 differ to those of theatre halls. The Athenian open air theatres are scattered throughout the urban agglomeration, a trend favoured by their operating regime because half of the 30 open-air theatres are operated by municipalities.

Unlike theatre halls, the operation of open-air theatres is now considered unprofitable and many of the city’s established open air theatres have shut down, weakening the open-air theatre clusters (traditionally around Pedion Areos). Pressure by the real estate market contributed to this , as open-air theatres usually require exclusive use of the plots that host them..

Most Athenian theatres (57%) have a small capacity of up to 200 seats. Small theatres are located mainly in peripheral central regions, namely in Kypseli, Metaxourgeio, Votanikos, Gazi, Kerameikos and Exarchia. In general, however, there is not a strong spatial pattern in the location of theatres according to their size , although there is a tendency for the largest among the small theatres to concentrate in traditional cluster areas (central Athens and Kypseli). Around 70% of small theatres opened after 2000, as opposed to medium-capacity theatres (400-700 seats), which were mostly founded in previous decades (up to 1970).

Athens has five large theatres of more than 1,000 seats. Four of these opened in the 2005-2014 period. They are the Badminton theatre (a legacy of the Olympics), the theatre of the Hellenic World Cultural Centre, the theatre of the Onassis Cultural Center and the “Pantheon” theatre. The construction of these four theatres highlights the dearth of venues able to accommodate large-scale productions. With the exception of the “Pallas” theatre,which was built in 1932 and still is the largest in Athens, ) there were no other theatres with a similar capacity prior to 2005, when the Badminton theatre opened. 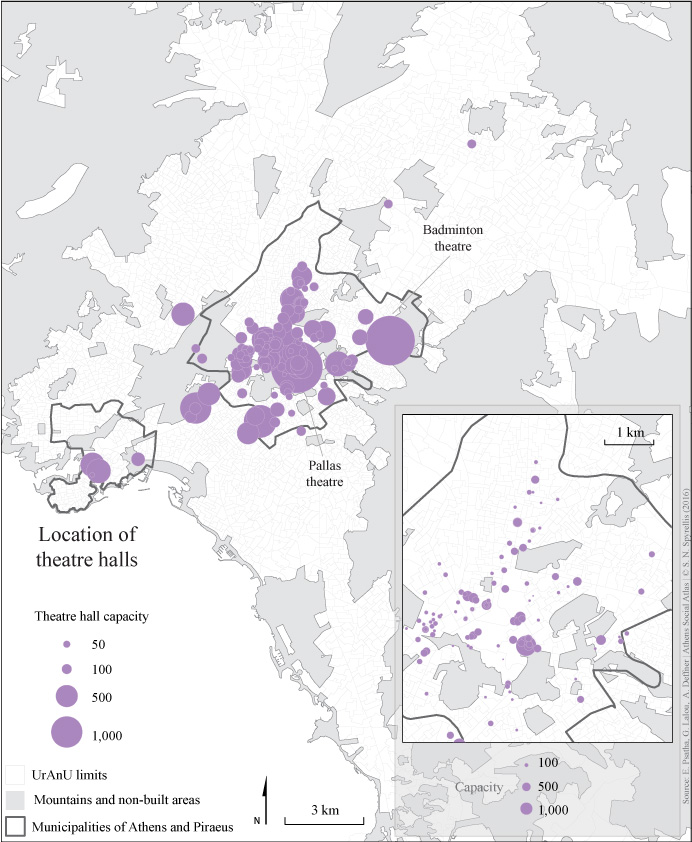 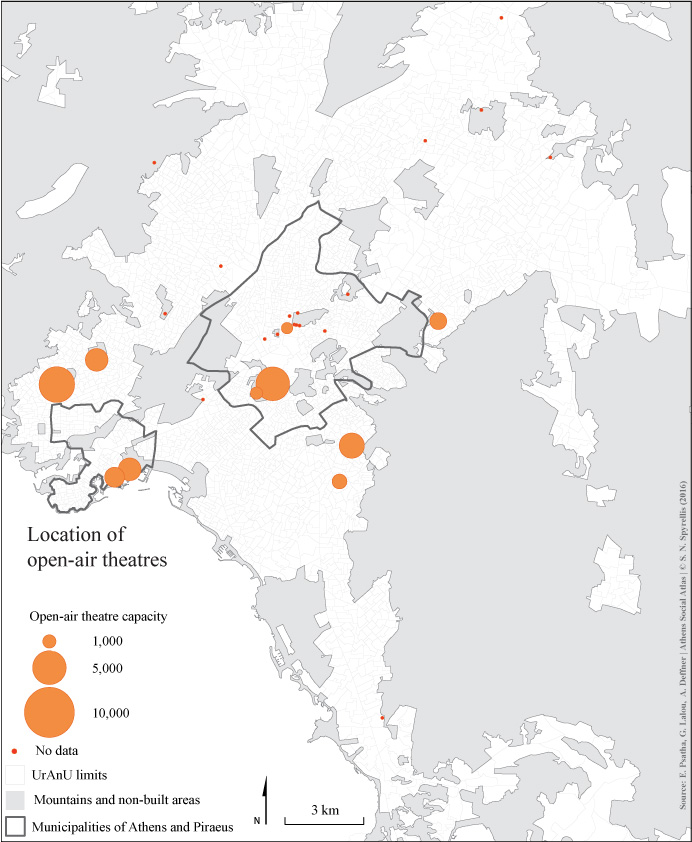 Unlike previous decades (mainly until the 1990s), there is no pattern to the theatre forms and repertoire in Athens. There is great variety in the type of premises, which is reflected in the repertoire and content of the shows. There are large venues suitable for big productions and entertainment shows (e.g. musicals); ‘traditional’ theatres accommodating 150-250 people that feature classic and modern performances; small makeshift theatres in places with different uses; experimental scenes; theatrical “hubs” with many scenes; multi-use art venues for smaller performances and all-purpose spaces in restaurants and bars that usually host musical theatre performances.

Theatrical activity in Athens represents a large part of the cultural scene, as evidenced by the sharp increase in the number of theatre venues. This trend boosted theatrical mobility and the sector’s resistance to the socio-economic crisis. New forms of theatre have been imported in recent years -such as musicals and costly blockbusters hosted in major theatres that were built during the past decade. Thus, it seems that in the last few years, Athens has been experiencing its “theatrical heyday” and its cultural capital has been reinforced. This, however, has not been strategically capitalised yet for tourism purposes.