Income is a defining factor for the selection of a place of residence, while housing costs are strictly connected to the cost of neighbouring houses. Real estate agents, appraisers and buyers use the latest prices of comparable real estate in local housing markets to assess prices. In parallel, since mortgages are linked to income, the choices of residents are defined by their income. In general, these mechanisms set a budget constraint on people’s available choices of where to live, creating an income-based stratification of housing locations. The aforementioned income segregation -the unequal distribution of individuals and households into different spatial units based on income- is apparent in most cities and is characterised by three key parameters:

This division is a process with a high degree of heterogeneity. As for the analysis of spatial effects between socio-professional groups, there are two conceptual components of housing separation:

The quantitative data used for our statistical analysis was drawn from the General Secretariat of Information Systems (GSIS) of the Ministry of Finance. It is based on tax returns of individuals per postal code and includes: the number of tax returns and declared income (at current values) of predetermined income brackets and broader professional categories. The timespan of the available data includes the time period between 2003 and 2013.

At this point, four important observations should be made regarding data reliability and the validation of the explanatory power of the analysis. Recording reported income may not represent the levels of prosperity precisely, since it does not represent the (unknown) size of the shadow economy and tax evasion.

The study area covers the entire region of Attica and includes 508 entries corresponding to postal sectors, out of which 289 are spatially identifiable. The remaining entries refer to Post Office Boxes and Post Offices and therefore cannot be geographically located.

The Attica region accounts for over 42% of the reported income of individuals in the country, though with a steadily declining share for the period 2003-2013 (Figure 1). Accordingly, the average declared income (declared income divided by the number of tax returns) is constantly above 115% of the national average throughout the entire period. The development of total declared income both at country level and within Attica can roughly be broken down into three sub-periods (Figure 2.1 and 2.2):

b) Between 2008-2010 there was relative stagnation (for high income levels), which seems to not be aligned with the deteriorating socio-economic context, but is probably related to the change in taxation in 2009. Thus, shrinking available income per head was counterbalanced by the enlargement of the fiscal base.

c) From 2011 to 2013, however, the effect of the financial crisis became visible in the tax base too, which shrunk significantly up to 2013. Since then, the average declared income has been less than that of 2003. Average income breakdown is worth mentioning here, as there are significant changes in income distribution: up to 2005, there were extreme maximum and minimum values ​​that affected the reported average income (Figure 2.1 and 2.2).

Figure 1: Participation of the Region of Attica in the total number of tax returns and declared income throughout the country (2003-2013) 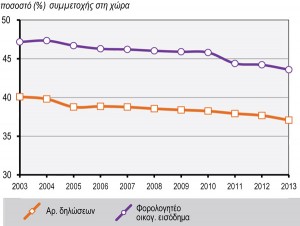 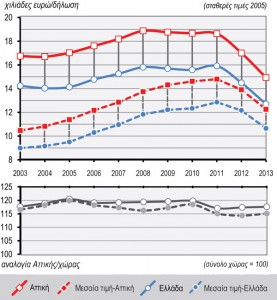 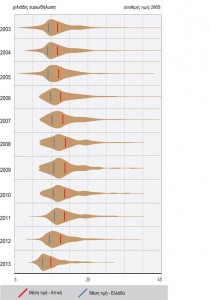 As regards the allocation of tax returns and declared incomes to income brackets in the period 2003-2013 (Figure 3), there has been a gradual increase in the participation of higher income brackets compared to medium-low brackets through 2010. In 2011, this trend reversed, as the lower income bracket shrunk and low-middle brackets expanded, returning to the levels of the previous years. Over time, income inequality, as reflected in the Gini index (Figure 4.1), is associated with the increase in average declared income until 2010, the rapid declared income decline to 2003 levels thereafter and the income stabilisation during 2012-2013. Correspondingly, changes in polarisation (i.e. in the ratio of the two highest income brackets divided by the two lowest income brackets) shows the difference in the rate of change between higher and lower brackets both in the growth period and during the recession (Figure 4.2).

Figure 3: Allocation of tax returns and declared income into 10 income brackets for the Region of Attica and for the entire country (2003-2013) 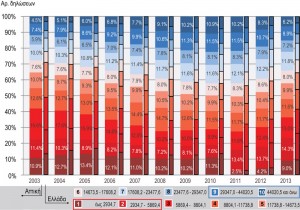 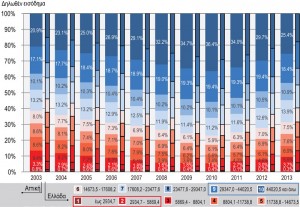 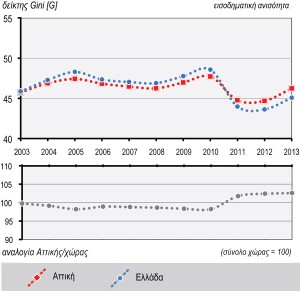 Figure 4.2: Relative index of the rate of income inequality (high/low income brackets ratio) for declared incomes in the Region of Attica (2003-2013) 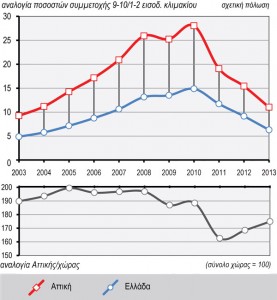 As regards the distribution in broader occupational categories, the main observations can be summarised in the following points (Figure 5.1): Salaried and Pensioners are the dominant source of taxable income. The widening of the tax base in the past three years corresponds to a slight increase in the participation of the Rentiers category in tax returns, however without a proportional increase in declared incomes. On the contrary, the weight of the Pensioners’ category gradually increased as of 2003 (tax return and income share). This also indicates structural unemployment problems both in Greece and in Attica in particular.

The percentage of declared income for Merchants/Artisans/Traders and Liberalss, who theoretically constitute the upper part of the socio-economic scale, remained stable . However, their contribution in tax revenue declined as a percentage of the total. All professional groups in Attica are clearly above the national average with respect to their average declared income. Reductions in income “shifted” after 2010, the year of the most significant cuts in wages and pensions, although the categories of Merchants/Artisans/Traders and Liberals seem to be affected more by the economic crisis (Figure 5.2).

Figure 5.1: Distribution of tax returns and declared income into broader income brackets for the Region of Attica and the entire country (2003-2013) 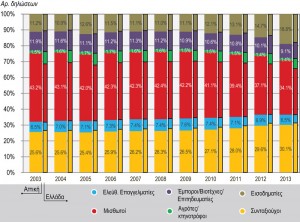 Figure 5.2: Average declared income of broader income brackets in 2005 prices for the Region of Attica and the entire country (2003-2013) 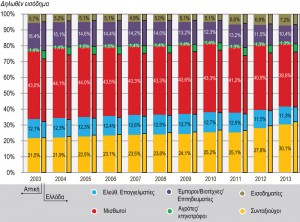 Mapping declared income in the broader metropolitan area of ​​Athens for the year 2013 shows distinct patterns of high and low income concentrations (Map 1.1). For comparison purposes, we have used smaller size representations for the years 2003, 2008, 2010. Previous studies (Μαλούτας 2001; Καλογήρου2011) have evidenced the east-west residential division , which our analysis also shows, together with a division between centre and periphery with local differentiations between north-south, particularly in the eastern part of Attica. More specifically, higher ​​declared incomes are concentrated in the north-eastern part of the metropolitan agglomeration (Erithrea, Ekali, Nea Pendeli, Vrilissia), in the centre of the Municipality of Athens in areas around Lycabettus (Kolonaki, Mavili Square, Evangelismos), in the southern part (Voula, Vouliagmeni) and in an enclave that includes Psychiko and some zones of the Municipality of Filothei. Lower incomes cluster in the western part of the Municipality of Athens, in particular the area of Metaxourgio, a number of zones in the Municipality of Agios Ioannis Rendis and Tavros as well as parts of the north-western zone comprising Aspropyrgos, Fyli, Acharnes and Kamatero.. There is limited “mobility” of the spatial analysis units in the income hierarchy. Areas at the upper end of the distribution have a very high probability to stay there or move upward, while low-medium areas are likely to “move” either higher or lower (Table 2.1). 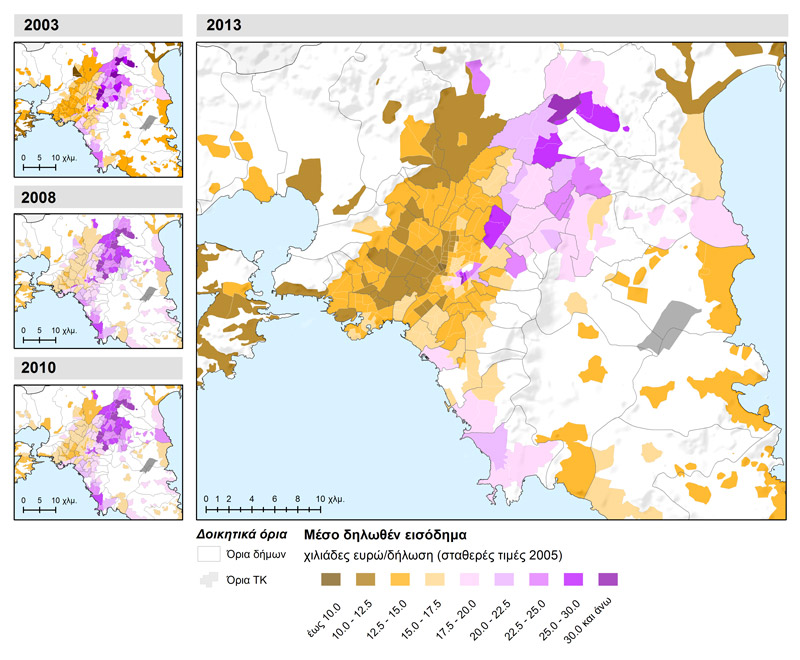 Table 2.1: Probability of transition from the initial to the final distribution by deciles for reported average incomes inAthens metropolitan area, 2003-2013 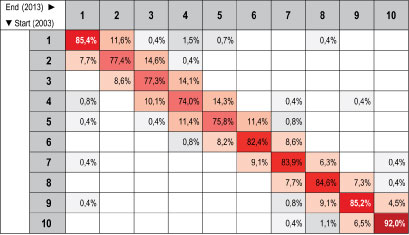 Spatial inequalities in the distribution of income in Athens are statistically documented through the analysis of spatial autocorrelation, i.e. by examining neighbouring areas with similar values. The high values of Moran’s I, the overall autocorrelation index, (above 0.5 in a 0-1 range) suggest significant spatial concentration trends. Over time, the spatial income segregation patterns remain virtually unchanged. A significant observation is the gradual polarisation of urban space with expanding high values in the North-Eastern part and the centre of the metropolis. Similarly, less compact but equally expanding low concentrations are recorded in the western part of the central zone and the western part of the Region of Attica. Low income enclaves have been recorded in the northern part (Acharnes, Marathon). However, given the downward convergence of low-middle income zones, they tend to shrink over time (Map 1.2). Overall, the spatial patterns of income separation are rather inert (Table 2.2). 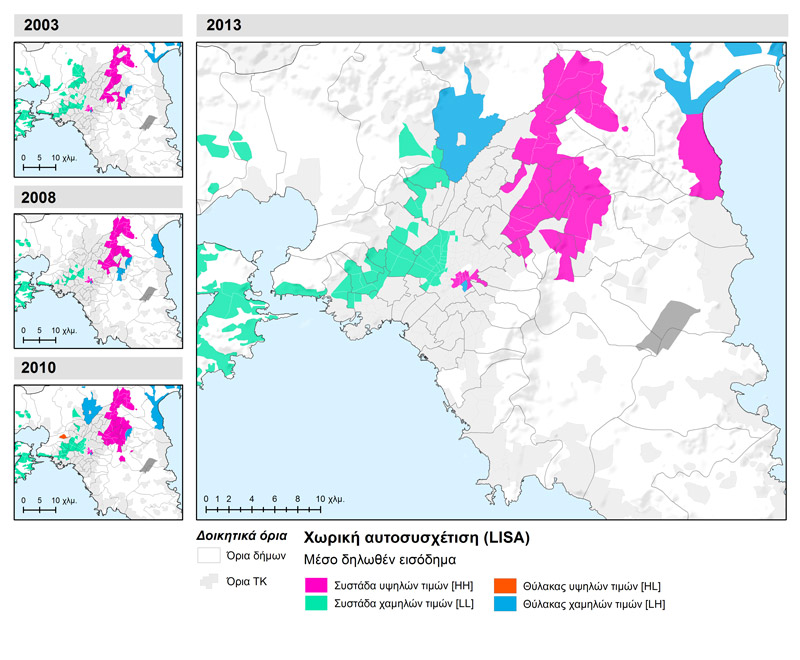 Table 2.2: Probabilities of transition from the initial to the final distribution by spatial concentration of the reported average incomes. Athens metropolitan area, 2003-2013 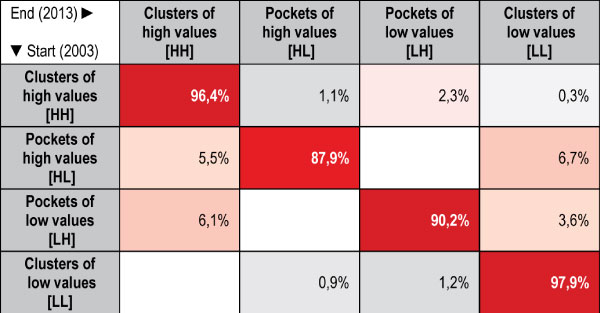 Income inequality is locally reflected by the Gini index for each territorial unit (Map 2.1). The form of the dispersion of index values ​​in space largely follows the geographical distribution pattern of declared income and confirms the strong correlation between inequality (income concentration in small social groups) and income levels, especially in the middle and upper income areas. The absence of tax returns from individuals in high income brackets in sparsely populated and rural areas contributes to the low levels of inequality in those areas. The conclusions from the analysis of the relative concentration ratio (Map 2.2) point to the same direction. Here, we have highlighted income concentration in higher income brackets and their presence in relation to low income brackets. 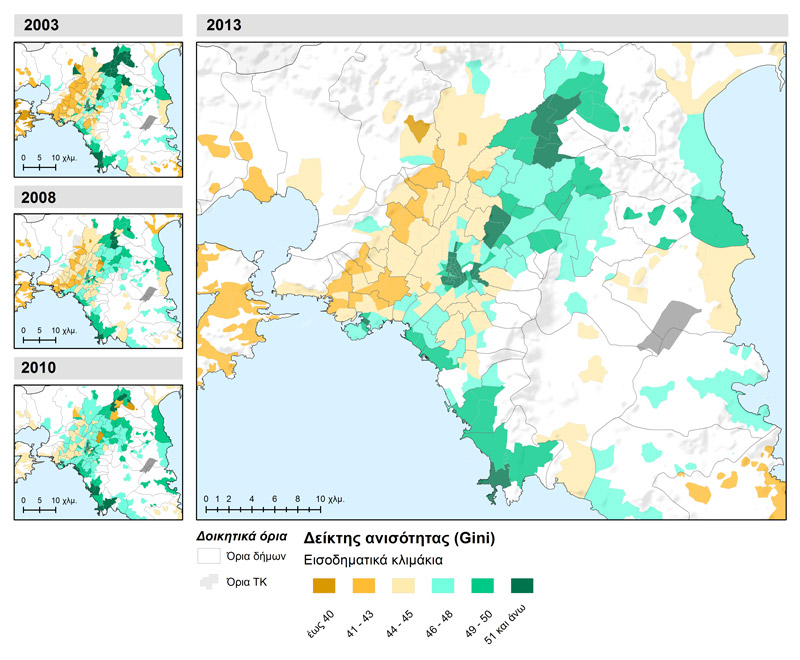 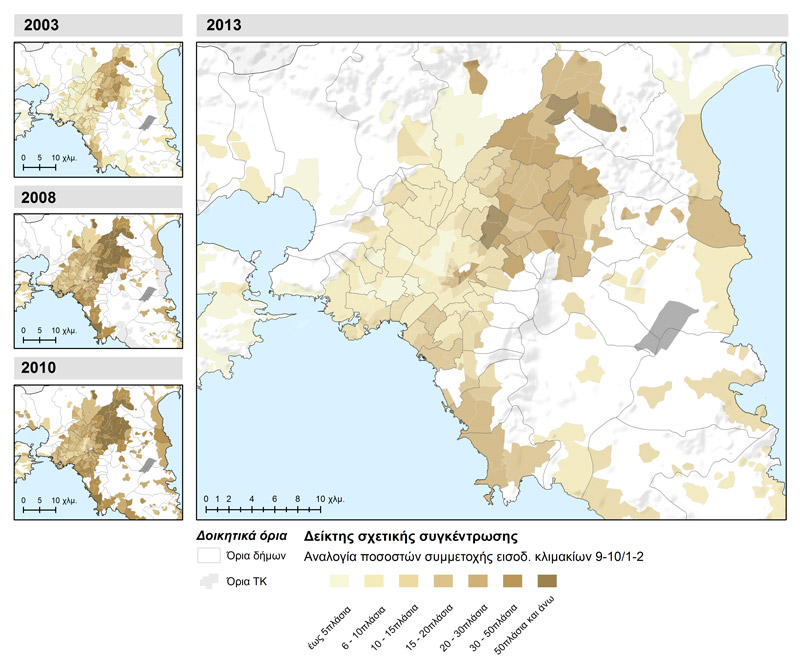 In order to illustrate the concentration patterns of professional categories, we applied an alternative method to determine the extent to which a category is overrepresented in a spatial unit compared to the entire area of study as well as in extended neighbourhood areas (Map 3.1). The Pensioners‘ category displays high participation rates in the central part of the city as well as in Salamina and Lavrio, which is obviously linked to the demographic structure of the population in these parts of the Region of Attica. Employees -the largest category- dominate in most spatial units. In spatial terms this translates into an expanded ring around the Municipality of Athens which expands into the north and north-western parts of the agglomeration. On the contrary, the category of Liberals forms a compact and clearly defined cluster in the centre and the north-eastern part of the urban agglomeration, with rings of relatively higher concentration around it. As far as Rentiers are concerned, there are clear but small clusters of heterogeneous social composition, with large participation rates in both the northern and southern part, as well as in “posh” areas of the centre. The Farmers category is located, as expected, in areas of low urban density. The central zone presents the greatest diversity in terms of professional composition (Map 3.2), while areas with high homogeneity (absence of many categories) are associated to the level of declared income. 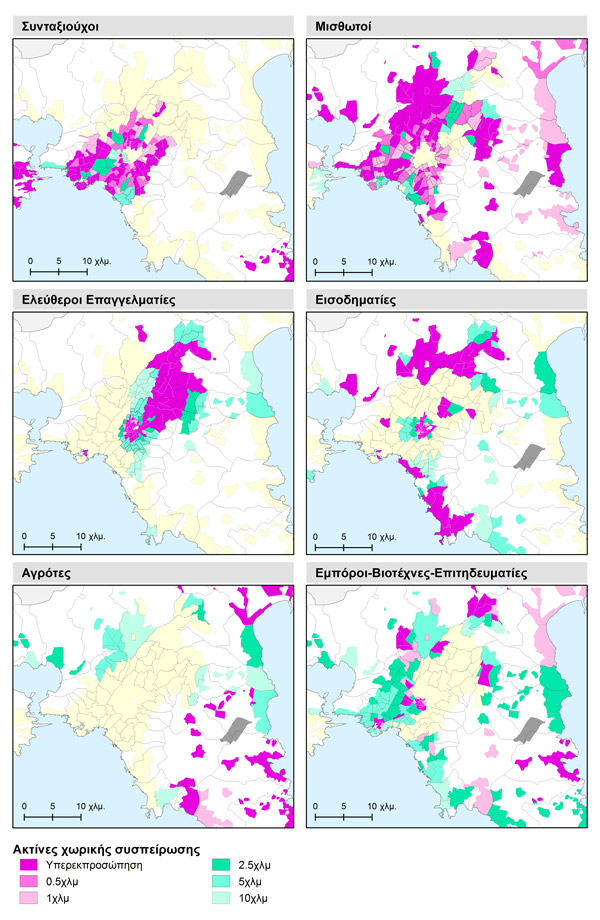 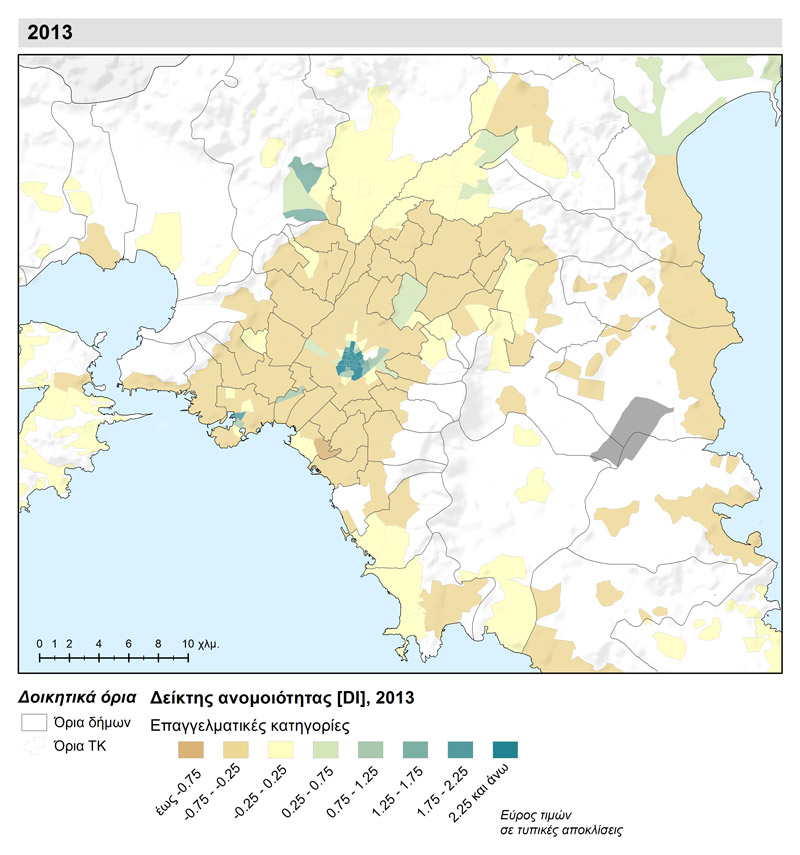 Spatial dynamics, in broader professional categories, as determined by the development of composite (multiple group) separation indices over time (Reardon et al., 2008), show a clear downward trend in all dividers (Figure 6.1). This indicates that there are slow processes of spatial redistribution and population dispersion for the professional categories in the examined spatial units. This suggests that spatial polarisation and homogenisation is mitigated at a local level, particularly for highly populated categories. More particularly, spatial inequality (Gini index) is relatively low, as only 12-15% of the population should be redistributed to achieve full and equal distribution. Similarly, the dissimilarity index (D) expressing spatial polarisation in the from of small group concentration, displays a decelerating trend in recent years. This suggests significant changes are taking place in the composition of spatial units, as populations move from heterogeneous regions to more homogeneous. In terms of professional categories (Figure 6.2), relatively stable and high levels of unequal distribution (Gini index) have been identified in the categories of Farmers/Breeders and Freelancers, while for other categories, index values ​​are significantly lower with a tendency for further reduction. The relative isolation of individual categories appears to be decreasing over time and Employees are leading this trend. To a certain degree, this indicates a withdrawal of the remaining less populated categories from specific, over-represented areas. 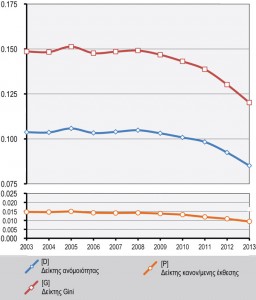 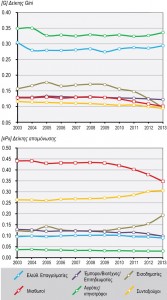 To conclude, in recent years, income inequality has remained stable and at lower levels compared to the period of growth -following a period of steady increase up to 2010. This is the driving force in the reduction of income segregation especially for middle income brackets, which currently converge at lower levels. The spatial inequality based on income, on the other hand, is an integral part of the profile of Athenian space. However, its intensity is obviously related to the evolution of income inequality. Over time high income areas become “entrenched”, while middle classes “depart” and “integrate” in areas lower income areas. Low income brackets do not appear to face isolation. For the time being, this is an indication of relative absence of poverty enclaves in the urban space.