A small street in Patissia: memories of people and buildings in Kondou street 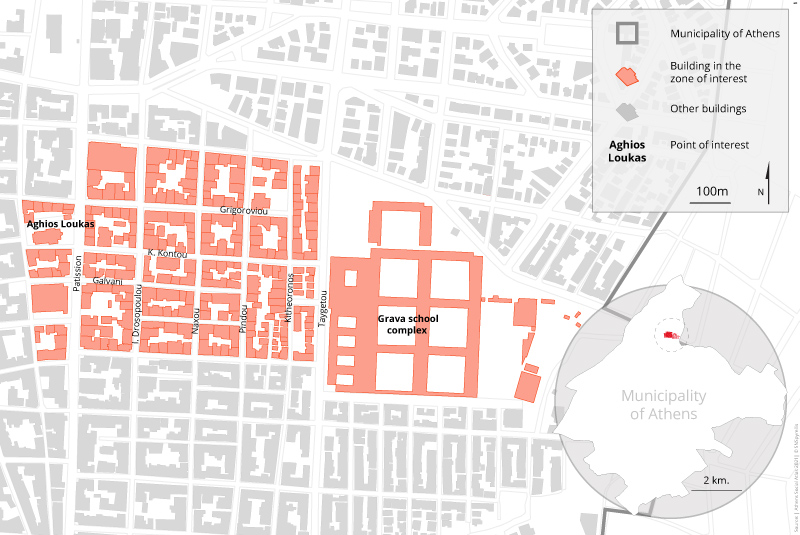 Memories from the 1940s start to fade away as expected. I remember in a segmented and mixed-up way, images in grey or black and white, completely mishmashed, and sounds like the voices of the yogurt or the ice-cream sellers, but also the echo of the German boots of the Wehrmacht squad descending Kondou one afternoon I was gazing standing on one of the two small balconies on my home’s façade.

I also remember the barricades during the December events (1944) at the corner of Kondou and Drosopoulou, the sound of bullets, the voice saying “attention! attention! the bullhorn is taking” [messages of the National Liberation Front communicated using bullhorns in urban areas] as well as the three English soldiers, as we saw them later in Angelopoulos’s film The Travelling Players, who visited us one morning looking for guns. I can say that all these things that happened then were not frightful or even strange and I confronted them as part of normal everyday life.

Figure 1: In the garden of my house (3 or 4 years old) during the dire years of German occupation

Kondou street as well as the broader area of Patissia, one of the best neighbourhoods of Athens during that period, were full of single houses of one or two stories, exemplifying the architecture of the interwar period with clear influence of modernist movements, simplified eclecticism, Art Deco and European modernism. These interesting houses soon followed the fate of older neoclassical buildings and gave their place to the first apartment buildings in the early 1950s produced through the “land-for-flats” building system.

Strangely, this small street was already paved even in the 1940s, in contrast with the other streets of the neighbourhood (Galvani and Grigoroviou), but also with the much bigger ones (Drosopoulou, Naxou and Pindou) who still remained in primitive condition, with no pavement, full of holes, stones and dust. This kind of isolation reduced traffic and gave the opportunity to kids to play freely chasing one another, playing hide and seek, football, even the ‘noble’ sport of rock fight which often ended in gauze, blood and open heads. “Thieves and policemen” was also very popular for boys and, in the game, policemen were chasing thieves, while in reality they chased communists.

Several other games of that period contributed to the socialization of kids in the neighbourhoods and in developing strong ties of friendship among them. My peers that are still alive should remeber most of those outdoor games with strange names: “stakaman” (from stick them up), “Biz”, “Berlina”, “Pinakoti-Pinakoti”, “Statues”, “Light my candle”, and the games with mud marbles or the more expensive version using glass marbles. Children with wellingtons liked to amuse themselves in muddy ponds in rainy days, while others played with the very popular small cards, under the name of “hapa-houpes”, representing football heroes, the heroes of Sunday matches who played for the team (not for money) when official football matches were performed in dirt fields.

Figure 2: The apartment building at the corner of Kondou and Patission avenue (still in place)

Walking on Kondou street, on the way up from Patission avenue, I remember on the ground floor of the building on the first corner on the right, Milano’s pastry shop and next to it two or three imposing two-storey buildings with beautiful facades. One of them was the house of the Vintzileou family, part of the famous dynasty of flower traders in Athens.

Figure 3a & 3b: Impressive two-storey houses with beautiful façades

When we crossed Drosopoulou street, the second house on the right was the house of my family, a plain bourgeois single house, characteristic of the interwar period. Fortunately, the house is still standing, among much taller apartment blocks built much later, due to the perseverance of my sister and architect, and it is one of the few remnants of a withdrawn and forgotten period.

Probably one of the reasons my parents chose this house was the neighbourhood. The area was inhabited by middle-class people, intellectuals, artists, educators, even successful business people.

My father made an important career in education, taught at the well-known Maraslios Education Academy, became vice-president of the Supreme Education Council and General Director in the Ministry of Education.

In the dire years of the early 1940s, the sunny, modernist, two-storey house next to ours on number 16, was occupied by a dark figure of Greek history. Black coat, black hat, black car, black soul. His name: Anastasios Tavoularis (1882-1945). His position: Minister of Security, the right hand of Walter Schimana, SS commander, chief of the German police and military commander of Greece from October 1943 to October 1944. Those interested in his copious activity during the German occupation can consult the relevant bibliography. After the liberation, the family Mouyer, known for producing good-looking shoes for children, occupied this house

A couple of houses further up, on number 20, lived the nice old man with the beret on his head and the worn-out gabardine. I remember him returning to his home in the evening, holding a cup of yogurt for his frugal diner. This is the only picture I remember from the Papadiamandis [Greek writer renowned for his simplicity and his interest in popular milieus] of Greek painting.

Many years went by before I learned that Theofrastos Triantafyllides (1881–1955), alumni of the School of Fine Arts of Athens, disciple of George Iakovides [Greek renown painter], followed his studies in Munich and then moved to Paris, where he contacted the modernist trends in contemporary painting, abandoning the academic realism of the School of Munich. When he returned to Athens together with Konstantinos Maleas, Nikolaos Lytras and others, he created the group “Art” whose first exhibition in 1917 created conflict with the status quo of painting.

In the work of Sakellarides, imbued by the pervasive light of the Impressionists, on can perceive the traces and shadows of Greek Expressionism’s melancholy. This would appear completely natural to anyone studying the undeserved and tragic life of this unfortunate great painter. His close friend, Pericles Vyzantios, mentions his peer in his autobiography:

In the early 1950s we watched with awe, admiration and some envy, the building—by the “land-for-flats” system—of the first apartment block in the neighbourhood, at the corner of Kondou and Drosopoulou. In the upper floor (the retiré), in the apartment of our friend Alekos, we first heard the emblematic “Rock Around The Clock” from a 45 rpm record. Along with the “land-for-flats” system, it meant the coming of a new era.

Figure 8: The first apartment block at the corner of Kondou and Drosopoulou street

The second apartment block of the neighbourhood was built opposite to the house of Triantafyllides at the end of the 1950s. This was the home for some time of Elli Vozikiadou (1932-2020), well-known actor, director, writer, costume designer and group leader in the theater. The older ones should remember her performances in the National Theater, her collaborations with the “Greek Popular Theater” of Manos Katrakis, the National Theater of Northern Greece, as well as for the foundation of her own theater: “Thymeli – Elli Vozikiadou”.

The excellent actor and very good friend Yvoni Maltezou has recently told me that she also lived in Kondou street for some time. I did not know her then. I admired her later in the “Last tram” at the Free Theater (Elefthero Theatro) as Katerina on the sides of the Little Hero (Mikros Iroas) – Giorgos Thalassis and of Spithas played by the unforgettable Giorgos Sabanis. I rember Sabanis—a bit younger than me—playing with his friends in Drosopoulou street.

In Drosopoulou street you could also meet Alkis Akylas, a strange old figure with a black hooded cloak, a beret and long white hair. His real name was Achileas Madras. He was, for many, the forefather of the Greek cinema. For others, he was an ambiguous and much discussed persona.

Continuing our walk to the upper part of Kondou street, we reach Naxou street.

Figure 12: At the corner of Kondou and Naxou

At the corner of Kondou and Naxou, on the left, was the Elementary School (Dimotiko). Next to the school, on Naxou street, was the home of Pandelis, same age as me, thin, tall with nice features. We met in 1952, became friends and soon discovered the magic of cinema, visiting frequently Electra, the open-air cinema on Patission avenue. At the same time, we started listening music passionately getting acquainted with Elvis, jazz, rebetika, Manos [Hadjidakis], Mikis [Theodorakis], but also with Ritsos, Seferis, Livaditis, Elytis, Embirikos.

When we finished school, I was admitted to the National Technical University of Athens to study Architecture, while Pantelis, loyal to his love for the big screen, studied at the Stavrakos School and his choice was vindicated since, as a director, he gave a real push forward to Greek cinema with movies like “Anna’s Engagement”, “Stone Years”, “Little England”, “The Last Note” that were loved by the public. Honest and straight films, without pompousness and ornaments, always focusing on human beings, probably influenced by Italian Neorealism, but also from the legacy of the great directors of the good American cinema.

Figure 13: With Pantelis Voulgaris when we were finishing school (1958)

Next to the Elementary School, as we walked upwards on Kondou street and on the left, in a small one-storey house with a garden, lived another good frien, Yannis Banias (1939-2012), civil engineer, a very active man, with rare sense of humor and high ethics standards, a fighter who fought throughout his whole life for the renewal of the Greek Left. He served as Secretary General of the Greek Communist Party (GCP) of the Interior from 1982 to 1988, founded the GCP – Renovative Left and was elected member of Parliament with SYRIZA in 2007.

Opposite Bania’s house, 30 Kondou street, you often saw a parked Vespa. It was probably the first scouter I ever saw and I was impressed by the scouter as well as by its owner. A handsome man, with finesse and excellent dressing, by the name of Fotis Polymeris (1920-2013), a rare bellcanto voice, but also a composer of many songs who made history for the so called light song. Together with Gounaris and Maroudas, Danai Stratigopoulou and Vembo they left unrepeatable performances of beautiful songs by Soyoul, Vellas, Yannides full of emotion and nostalgia.

These were some of the memories of my everyday life in a small street of Athens, where I lived for 27 years. In the dark days of April 1967 we moved to an apartment, relatively close, in the same broad area. However, a part of myself always remained in my old neighbourhood and I never forget my dear childhood friends, those we lived so many years together and are no longer with us.