In recent years a large number of Greek nationals emigrated from Greece. Many of them are highly skilled young people and their number [1] has risen significantly since 2012. This issue seems to be a matter of concern for both scientific and broader sociopolitical debates (Figure 1).

Meanwhile, each year a smaller number of Greek citizens decide to immigrate back to Greece. Thus, the present outflow of Greek emigrants is partly compensated by a reverse inflow of returning Greek migrants. Many of those returning to Greece, decide to settle in the greater Athens area.

The profile of those returning from abroad 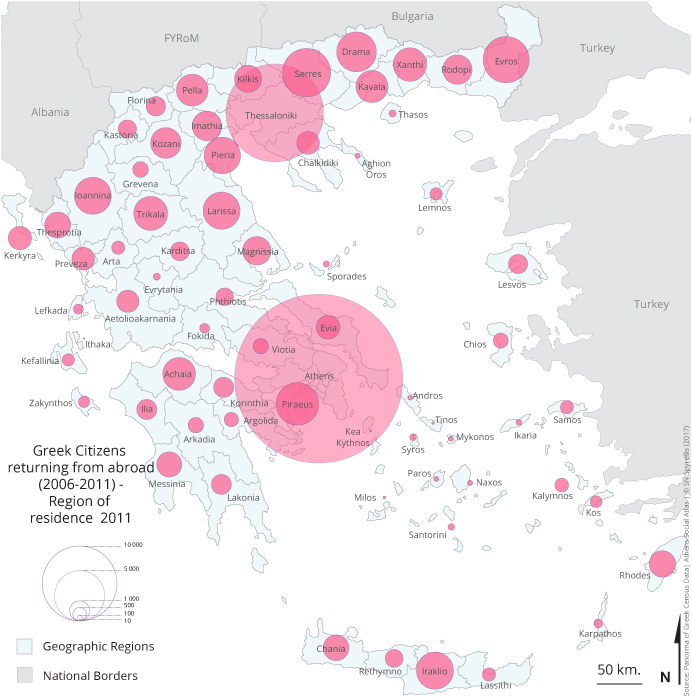 Many of these returnees were young people with a higher education degree and employed in the tertiary sector (Figures 2, 3, 4 and 5).

Figure 3: Number of Greek citizens who immigrated to Greece from abroad (2006-2011) and settled in Attiki by education level (2011)

Figure 5: Number of Greek citizens who immigrated to Greece from abroad (2006-2011) and settled in Attiki by main sector/branch of economic activity (2011)

According to the Census, many of those who return from abroad and settle in the broader area of Athens, seem to prefer settling either in expensive areas in the city center (like Lycabettus-Kolonaki, Syntagma, Acropolis-Philopappou, parts of Pagkrati) or in suburbs with residents of a rather high socioeconomic profile (like Kifissia, Filothei-Psychiko, Papagos, Glyfada, Ekali-Dionysos, Drafi, Voula-Vouliagmeni) (Map 2). 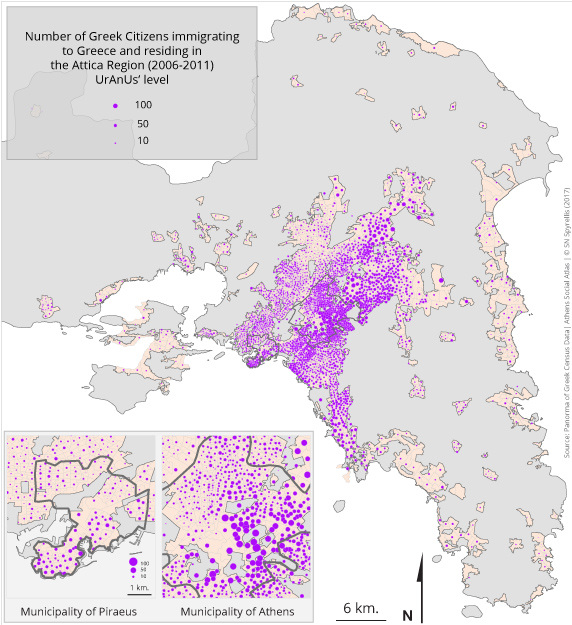 Municipalities such Philothei-Psychico and Kifissia (i.e.suburbs with a high socioeconomic profile), have not only attracted a big absolute number of Greeks who immigrated back to Greece between 2006 and 2011; these returnees seem also to account for a noticeable percentage of their total population (Tables 1 & 2 and Maps 3 & 4).

This confirms the finding of Lambrianidis (Λαμπριανίδης 2013, 331) who states that “when parents are in better socio-economic situation, their children are more likely to return to Greece” (his survey was conducted in 2011 using a large sample of Greek citizens who had lived and worked abroad and then returned for permanent settlement to Greece).

Table 1: Percentage of Greek citizens who immigrated to Greece from abroad (2006-2011) and resided in selected municipalities in the region of Attiki in 2011 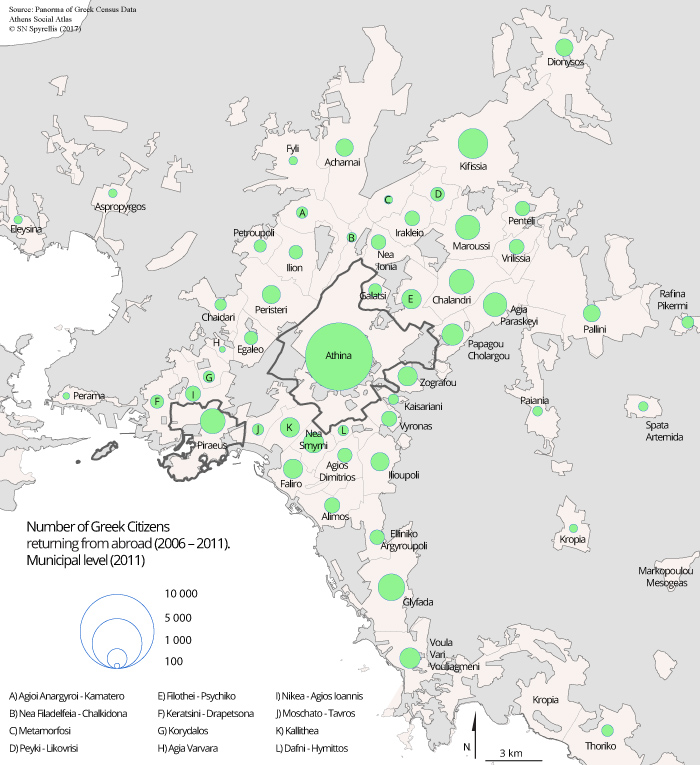 Map 3: Number of Greek citizens who immigrated to Greece from abroad (2006-2011) and resided permanently in the region of Attica (2011). Municipal Level 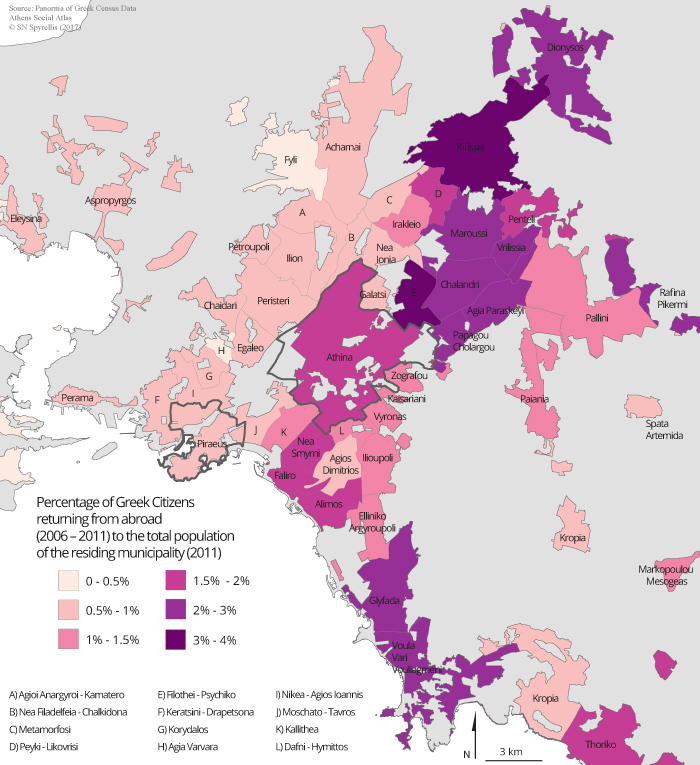 Map 4: Greek citizens who immigrated to Greece from abroad and settled in the region of Attiki  (2006-2011) as percentage to the total population. Municipal level

Comparing the Population and Housing Censuses of 2001 (map 5) and 2011 (map 4), we notice that the percentage of returnees in high socioeconomic profile mmunicipalities –like Filothei-Psychico, Kifissia or Glyfada– have almost doubled during the 2000s. At the same time, the increase of their presence in the opposite end of the municipalities’ social hierarchy was much smaller, even though their percentage in 2001 was very low (Table 2). 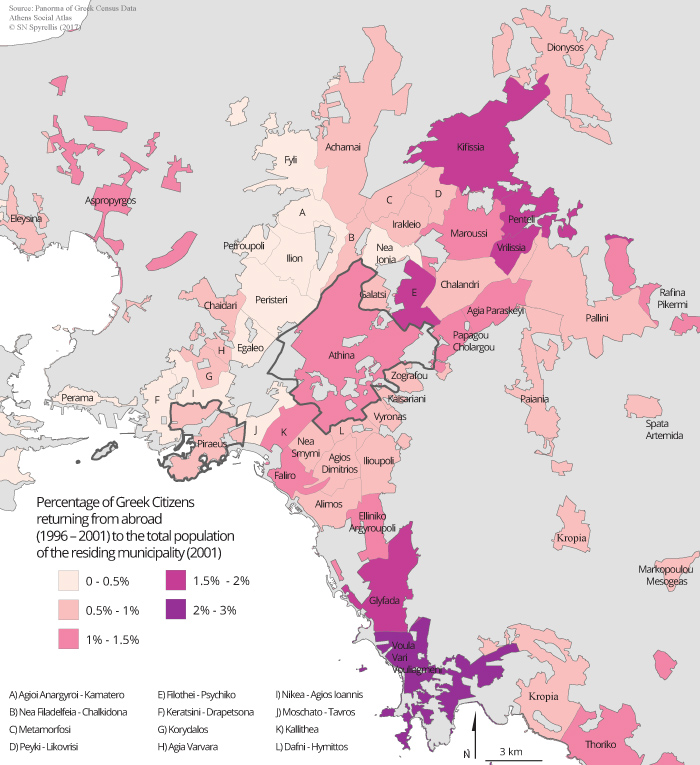 Map 5: Greek citizens who immigrated to Greece from abroad and settled in the region of Attiki  (1996-2001) as percentage to the total population. Municipal level

Regarding the period 2010-2011 in particular, 33.751 Greek citizens are estimated to have immigrated to Greece, according to the Population and Housing Census of 2011. One out of three decided to settle in the broader area of Athens (ΕΛΣΤΑΤ, 2015c).

Despite the fact that during that period the Greek economy was in deep recession –the unemployment rate in the first quarter of 2011 for young people aged 15-29 years old was about 31% (country level) and the unemployment rate in Attica was about 14.7% (ΕΛΣΤΑΤ, 2011)– 3.643 young Greeks (20-29 years old) immigrated back to Greece and settled in the Attiki region (ΕΛΣΤΑΤ, 2015c).

After 2011, the number of Greek nationals who immigrated to Greece is estimated to have slightly increased (Εurostat, 2016b), probably due to the increase of the outflows from the country during the previous years (Figure 6).

Figure 6: Number of Greek citizens who immigrated back to Greece

However, even if a considerable number of Greeks who migrated in the past have returned [5], it is estimated that in 2011, about 680.000 people over 15 years old, born in Greece, lived abroad [6]. Among them, 144.000 were considered to be highly skilled (Arslan et al. 2014: 60). On the other hand, recent surveys (Κωνσταντέλλος 2015, Ηλιοπούλου 2016) have shown that many Greek nationals who live currently abroad are willing to return to Greece, under certain conditions.

The fact that a considerable part of those who nowadays migrate back to Greece are elderly people, is associated with the large emigration waves recorded from the late 50s to the early 70s (Figure 7). These waves were mainly destined to West Germany, Belgium, Australia, the US and Canada. Between 1955 and 1977, about 1.2 million Greek nationals emigrated from Greece. This period coincides with the peak of post-war urbanization and the number of emigrants is more or less equivalent with the increase of the urban population during the same period. Cities received people from the countryside and, at the same time, sent people abroad. 16.994 persons emigrated from the region of Attiki only in 1965 [7] (ΕΣΥΕ 1967, 293).

Figure 7 : Number of emigrants from Greece – Greek citizens only

In this particular period , most of the migrants left the country for economic, political, educational or other personal reasons. It is estimated that in the 60s, Greece lost a significant part of its higher education graduates (e.g. engineers, architects, scientists, physicians and others trained in medical profession etc.) (ΕΣΥΕ 1968,170, cited by Kourvetaris 1973; Zobanakis 1980).

Moreover, 8.717 Greeks were studying abroad in 1960 according to UNESCO and their number increased to 14.147 in 1970 (Kyprianos 1995, 606, cited by Pelliccia, 2012). Part of these students remained abroad after the completion of their studies. This is one the reasons, some returning Greek migrants, over 65 years old, are university graduates, even though the bulk of migration at that time consisted mainly of low skilled manual labourers (Figure 8).

Figure 8: Number of Greek citizens over 65 years old who migrated back to Greece between 2006 and 2011 and settled permanently in the region of Attiki by education level (2011)

Figure 9 shows, on the contrary, the clear dominance of university graduates and postgraduate degree holders among the young Greek immigrants who returned to Greece from abroad during the same period (2006-2011) and settled permanently in the region of Attiki in 2011.

Figure 9: Number of Greek citizens, aged 15 to 34, who migrated back to Greece between 2006 and 2011 and settled permanently in the region of Attiki by education level (2011)

Regarding the young people who emigrate from Greece in recent years, the main reasons seem to be the following: studies (higher education), employment, doing business abroad as well as other personal reasons. It is quite common for people to state more than one reason [8] .

The number of Greek students in EU countries was estimated at 37.000 in 2012. Countries like the UK, Germany, Italy and Cyprus are some of the most popular destinations for Greeks studying abroad (Εurostat, 2016c). Many Greek students abroad wish to return after finishing their studies. According to a qualitative survey, conducted in 2011 among Greek students enrolled in universities in Rome, 63% would like to return to Greece at some point, while nearly half of them stated they wanted to return immediately after finishing their studies (Pelliccia, 2013).

The main reasons why young Greeks who live abroad are considering to return, are nostalgia for their home country (with frequent references to climate and lifestyle) and their family, employment opportunities –rather rare and socially quite unequal since the beginning of the recession– as well as personal reasons. On the contrary, factors like the economic recession or the feeling of being excluded from job opportunities –often perceived as lack of meritocracy in hiring procedures– are a matter of concern regarding their return and eventually extend their migration period.

Repatriation is definitely crucial for immigrants’ home countries and for the particular places they chose to settle when they return. It does not only lead to population growth and dynamism –especially if mainly young people constitute this return wave. People returning from abroad often come with new skills, knowledge and expertise, let alone with their savings.

[1] Migration is defined as “the action by which a person changes the place of his /her usual residence” for at least one year  (ΕΛΣΤΑΤ, 2014a).

[2] In the questionnaire of Population and Housing Census of 2011, the following questions were included: “have you ever resided abroad?”, “when did you settle in Greece” and “state the country of your previous residence” (ΕΛΣΤΑΤ 2011).

[4] UrAnU: Urban Analysis Units. They are a corrected form of Census Tracts (CT) used by ELSTAT in the sense that small CTs have been aggregated in order to avoid units with less than 900 inhabitants. This operation was performed to avoid confidentiality issues. Attiki is divided into 3.000 URANUs with an average population of 1.250 persons.

[8] These findings have come out of the early stages of the qualitative research through interviews with Greek migrants/residents of the greater Athens area, that the author carries out since 2016 in the context of his PhD thesis at Harokopio University under the title “The implications of the emigration of Greek scientists from the broader area of Athens”.