Disrupting the trend to abandon the centre of Athens: migrants in housing and business activities

After 1990, a significant number of migrants arrived and settled in the Prefecture of Attica and, mainly, in the Municipality of Athens, in the context of an already changing urban environment. The 1980s was a decade of intense social and demographic change both in the city centre and the periphery.It brought about significant transformations to the city’s function.

In particular, the 1980s saw a limited rise but a significant geographic redistribution of the population in Attica, the prevailing tendency being a move towards the suburbs. The population losses in central residential areas and the growth in peripheral areas where more pronounced for middle to high social and professional strata, while the biggest population increases were observed in the so-called “good suburbs” in the city’s north as well as to the south-east of the urban agglomeration of the capital (Μαλούτας et al., 2006) [1]. Within a period of just ten years, the population of the Municipality of Athens dropped from 885,737 in 1981 to 772.072 in 1991, while, according to the latest census, it merely reaches 664,046 residents in 2011.This population includes a significant number of migrants, which were added to the overall population in the past two decades [2].

This constant population shrinkage, together with the socially imbalanced character of the ‘flight’ to the suburbs already noted since the beginning of the 1980s, resulted in a significant vacant, run-down and depreciated housing stock in central areas of the Municipality of Athens.

During that period, small and medium-scale retail businesses also moved towards the suburbs. Until the late 1970s 41% of all commercial activities of the Attica Region were located in the Municipality of Athens. That location gradually lost its dynamic and, by 2011, that percentage had dropped to 34% (Γεωβάση Αττικής  2012). The entry of multinational chains and shopping centres in the domestic market and the establishment of new shopping malls in the suburbs, further weakened commercial activities in the city’s central neighbourhoods. Today, the percentage of closed retail stores in the city centre exceeds 30% (National Confederation of Greek Commerce-Institute of Commerce & Services, 20/09/2012), although the economic crisis is an additional key factor explaining this.

As mentioned already, migrants who arrived in Greece mainly gathered in the Region of Attica and approximately half of them settled in the Municipality of Athens (Βαϊου et al. 2007). According to the 2011 census, migrants represent 17.7% of the total population in the Central Sector of the Prefecture of Attica,

This paper aims at underlining the importance of the presence of the immigrant population in the Municipality of Athens for disrupting the desertion, abandonment and degradation trends in the housing stock and the business activity in the city centre.

To this end, our study focused on the participation of migrants in housing and business in two of the Municipality’s neighbourhoods, Kypseli and Metaxourgeio. With regard to housing, we recorded the ratio and geographical distribution of tenants, both Greek and migrants, based on the names written on doorbells of a representative sample of apartment buildings [3].

As to business activities, we recorded the number and location of open and closed migrant retail shops and service outlets as well as some of their features, such as the type of commercial activity, the migrant shopkeeper’s place of origin and the clientèle. In addition, we recorded the overall activities of both migrants and Greeks in three representative central streets in each neighbourhood, to define the ratio between them [4].

According to our survey, in Kypseli 15% of the apartments is inhabited by migrants while another 15% of the housing stock lies empty. These figures are 16.5% and 21.5% in Metaxourgeio. 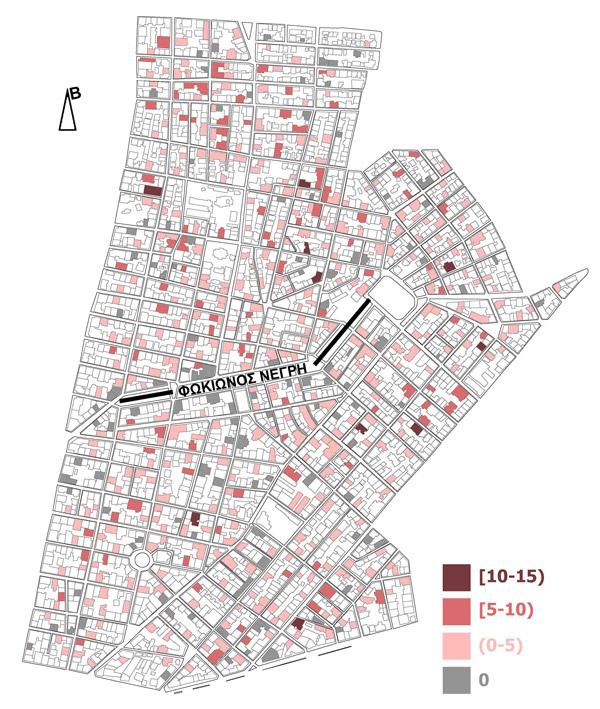 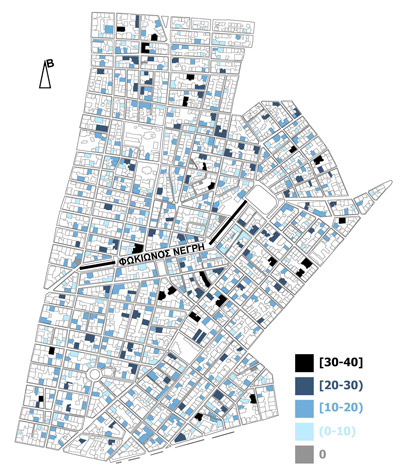 In Kypseli, the geographical distribution of migrant residents is relatively uniform, apart from a reduced presence along Fokionos Negri street (where rents remain high) and a slightly raised concentration in the north-west where lower income families have traditionally resided. A comparison of the geographical distribution between migrant and Greek residents shows that settlement patterns are similar, indicating a generally balanced ethnic mix in the housing sector (map 1a, 1b). Similarly, in Metaxourgeio, migrant residents are spread relatively evenly throughout the area, with the exception of a slightly increased concentration in the north-east, near Omonia Square (map 2a, 2b). 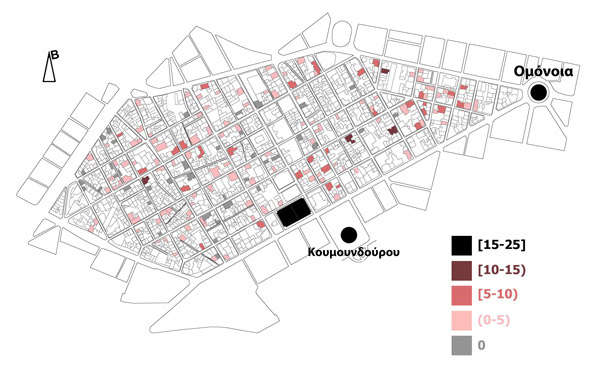 Map 2a: Number of immigrants per block of flat in Metaksourgio (sample of 181 blocks of flats and 2.800 apartments) 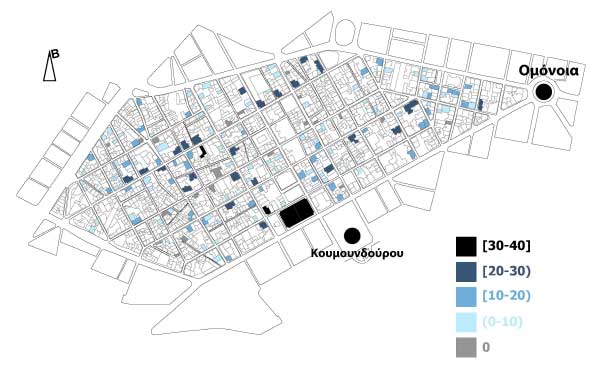 This ethnic housing mix is ​​confirmed not only horizontally (at neighbourhood level) but also vertically (at building level), as migrants and Greek residents are not confined to certain floors of apartment buildings. In Kypseli, nearly half of migrant residents live between the basement and the mezzanine, while the other half lives between the first and the fourth floor, with very few having access to higher floors. In Metaxourgeio, an area with lower buildings and more detached homes compared to Kypseli, the majority of migrants resides between the first and third floor.

Migrant retailers in Kypseli and Metaxourgeio account for 10% and 44% of the area’s overall commercial activity respectively. The differences between the two areas are significant and relate to both their geographic and social characteristics as well as to the specific migrant concentrations in each area.

In Kypseli, we recorded 133 open and 48 closed retail shops operated by migrants. They were almost evenly spread across the neighbourhood (map 3). In their majority, these are food, phone service, general merchandise stores and hair salons. The main places of origin of migrant shopkeepers are Africa, Asia, the former Soviet Union, China and the Middle East (Table 1). In many cases, the type of commercial activity is linked to the migrants’ places of origin. In addition, the commercial activities undertaken by migrants in Kypseli are mainly addressed to an ethnically mixed clientèle. More specifically, according to the data recorded, 56% of businesses primarily target migrants, in particular hair salons and phone services and 44% an ethnically mixed clientèle, mainly food and general merchandise stores. 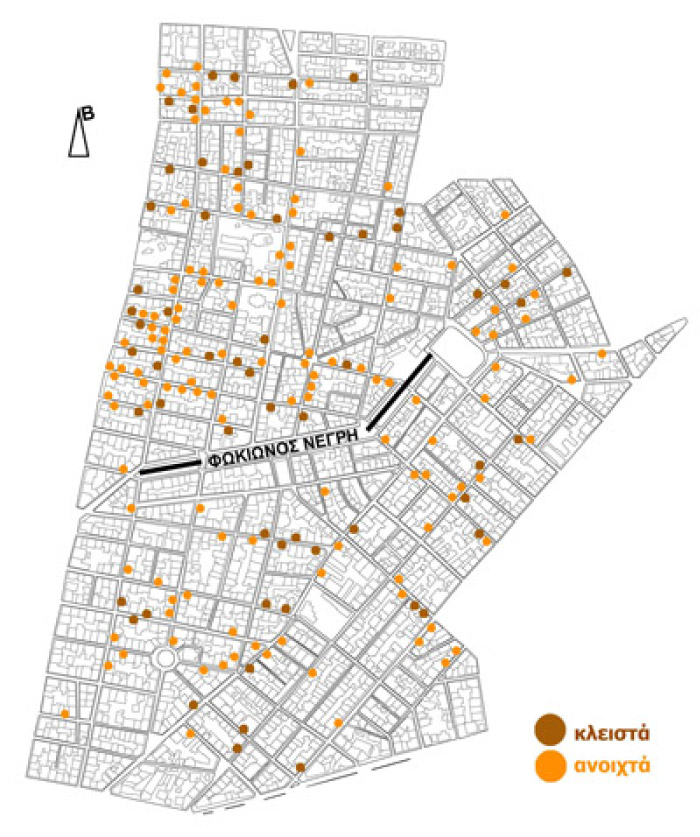 Map 3: Open and closed stores owned by immigrants in Kypseli

Table 1: Type of commercial activity and place of origin of migrant shopkeepers in Kypseli

In Metaxourgeio, we recorded 260 open and 28 closed migrant-run retail shops, mainly located on the east side of the neighbourhood, near Koumoundourou Square and on the northern part of the neighbourhood, near Omonia Square (map 4). The prevailing type of business in this neighbourhood is wholesale clothing, followed by general merchandise shops, food shops and catering businesses. In Metaxourgeio too, the places of origin of migrant shopkeepers are directly connected to the types of commercial activity: The prevailing group is Chinese migrants, followed by nationals of countries of the former Soviet Union and Asia (Table 2). Finally, 67% of shops target an ethnically mixed clientèle, while 32% a migrant clientèle. 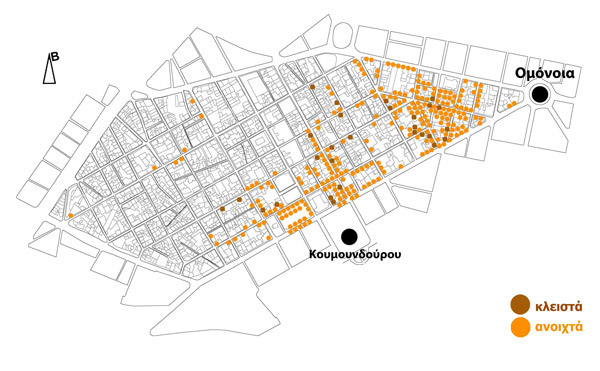 Map 4: Open and closed stores owned by immigrants in Metaxourgeio

Table 2: Type of commercial activity and place of origin of migrant shopkeepers in Metaxourgeio

The aforementioned records show that the mass inflow and settlement of migrants in the Municipality of Athens significantly contributes at disrupting the trend to abandon certain central neighbourhoods, to devalue the housing stock and weaken vital functions for the city, such as housing and business activities. In other words, the presence of migrants in these two areas covered the gap created by the ‘flight’ to the suburbs of the past years and retained a residential presence and activity in the two central neighbourhoods under study. Furthermore, it contributed to the revival of the local economy via the (re)activation of the rental market for both housing and commercial properties. Finally, through restoration works, migrants contributed to the renewal of the building stock and the surrounding public areas with personal expenses and efforts. Overall, the presence of migrants in the city centre seems to be arresting its decline in terms of population and function and to be reinforces its traditional multifunctional character.

[1] The population drop in the Municipality of Athens and the population growth in small suburban municipalities and communities continued through the 1990s, though at a slower pace (Μαλούτας et al. 2006, 279).

[3] This method of data collection has some serious limitations. The names of tenants on the doorbells of apartment buildings are often not updated or “hide” information, when tenants prefer to remain invisible (Βαϊου et al. 2007, 82). However, we believe that this method can provide, a satisfactory, if not completely accurate, evaluation of the number of migrant tenants in the small scale of an apartment building.

[4]  The on-site recordings in both neighbourhoods under study were conducted between June 2012 and February 2013. The three representative central roads of these two areas are: Drosopoulou, Agias Zonis and Kyprou in Kypseli and Megalou Alexandrou, Agisilaou and Kolokunthous in Metaxourgeio.