The exposure of Athens to Natural Hazards

Attica has always been one of the country’s regions that is most exposed to natural hazards, particularly earthquakes, floods, heat waves and forest fires. The high exposure of Attica and the basin of the Capital in particular is due to its high concentration of population, activities, infrastructure and high-value stock in a confined area that is designated as a high-risk zone.

Attica is one of the Greek regions with the highest macroseismic intensities over the last 50 years (Papanastasiou et al. 2008). Attica’s exposure to seismic hazards was reassessed after the Parnitha earthquake in 1999 (size 5.9 R and epicentre 18 km northwest of Athens) that caused more than 140 fatalities and 3 billion EUR in losses (Map 1). It was the deadliest earthquake of the last 50 years in Greece (Photo 1) and led to the revision of the country’s seismic hazard map. The new map, which forms the basis of the 2000 Hellenic Earthquake-Resistant Buildings Regulations, registered a significant part of Attica and the northernmost municipalities of the capital in Zone II i.e medium seismicity. State policy for the prevention of earthquake risk is based almost exclusively on the construction of earthquake-resistant structures. Thus, buildings in Attica that have been built without permit remain exposed. After the earthquake of 1999, the limited public financial support for restoration and reconstruction only covered owners (not tenants) and mainly residences (not premises related to economic activities). Thus, the post-earthquake reconstruction did not lead to a substantive reduction in exposure and vulnerability of the affected areas against seismic hazards. Quite the opposite.

Map 1: The epicentre of the 1999 Parnitha earthquake

Photo 1: Damage caused by the1999 earthquake in the Municipality of Acharnes, Attica

Athens also often suffers from flooding, although the eastern part of Greece has a low annual rainfall (~ 300mm). Thunderstorms in Athens are nearly as frequent as in the rest of Greece. Apart from climatic and geomorphological factors, flood susceptibility is mainly due to human interventions (Κουτσογιάννης  2002). Due to rapid urbanisation and frequent development without permit, the city was gradually stripped of its natural flood protection, as a considerable proportion of its stream network was covered or built over (Map 2) and few open planted areas were left unbuilt. Moreover, repeated forest fires in the mountains surrounding the basin increased exposure to floods, especially in peripheral municipalities. The historic city centre has a mixed sewage system that offers increased protection as compared to the municipalities developed later, especially those along the Saronic coast.

Map 2: Covered and uncovered stream networks in the Basin of Athens

Attica is one of the country’s regions that is most affected by heat waves. Despite its mild Mediterranean climate, there are significant temperature differences among seasons. Heatwave temperatures (38oC or more) are not rare during the summer and the 49oC recorded in Athens in 1977 is the highest temperature ever to be recorded in Europe (WMO, 2011). At the same time, Athens suffers the consequences of the urban heat island effect that contributes to and enhances heat wave temperatures. The highest surface temperatures in Attica during the summer are recorded in Elefsina-Aspropyrgos, Megara, Athens city centre (due to the urban heat island effect) and Mesogeia (Map 3). The public management of heat waves is limited to preparedness/emergency response.

Map 3: Standard surface temperature map of Attica during the summer*

In terms of the ratio of burned forest area to the total forest cover, Attica was the most fire-ravaged region of the country in the period 1991-2004 (26%). As expected, those primarily exposed to forest fires are holiday and other countryside settlements in Athens as well as developments built in forests and forest lands, often without permit. However, as shown by the dramatic destruction of the Parnitha National Park in 2007 (officially attributed to a short circuit in an electricity pylon), the secondary and long-term consequences affect the residents of the capital. The incineration of the last remaining large forest area near Athens caused a change of the microclimate, hotter summers, prolonged heat waves and floods in the winter. The worst aspect of the problem of forest fires is that the vast majority of their causes (70%) are recorded as unknown (figure 1), which drastically reduces the possibility of an effective prevention policy.

The risk exposure factors associated with climate change (heat waves, floods, forest fires) are expected to increase in the future. According to a study by the National Observatory of Athens (Ακύλας et al. 2005), in the 90s, heat waves in Greece increased three-fold compared to the preceding thirty-year period.

Human, Social and Institutional Vulnerability before and after the Crisis

The potential losses for those exposed to hazards depends on their vulnerability or their susceptibility to damage. This vulnerability is multifaceted: human, social, economic, institutional, urban, ecological etc. Human and social vulnerability depends on factors such as the lack of social cohesion, social exclusion, poverty, gender, age, household composition, unemployment, education level, health status, housing conditions, degree of access to political power, resources and rights, risk response culture and obstacles to access information on risks.

Analyses of spatial and social inequalities in Athens by social geographers and urban planners before the crisis (Maloutas 2004, Emmanuel 2004) can help us map the unequal distribution of spatio-social vulnerability before the crisis. Map 4 presents the pre-crisis rating of the Capital’s municipalities on cumulative spatio-social vulnerability due to poverty, illiteracy, ageing and population density. Certainly, these four coefficients are not the only ones with critical importance, but they define many others (for example, poverty often implies problematic housing conditions). Inequalities in cumulative vulnerability before the crisis are a precursor of more intense inequalities post-crisis. 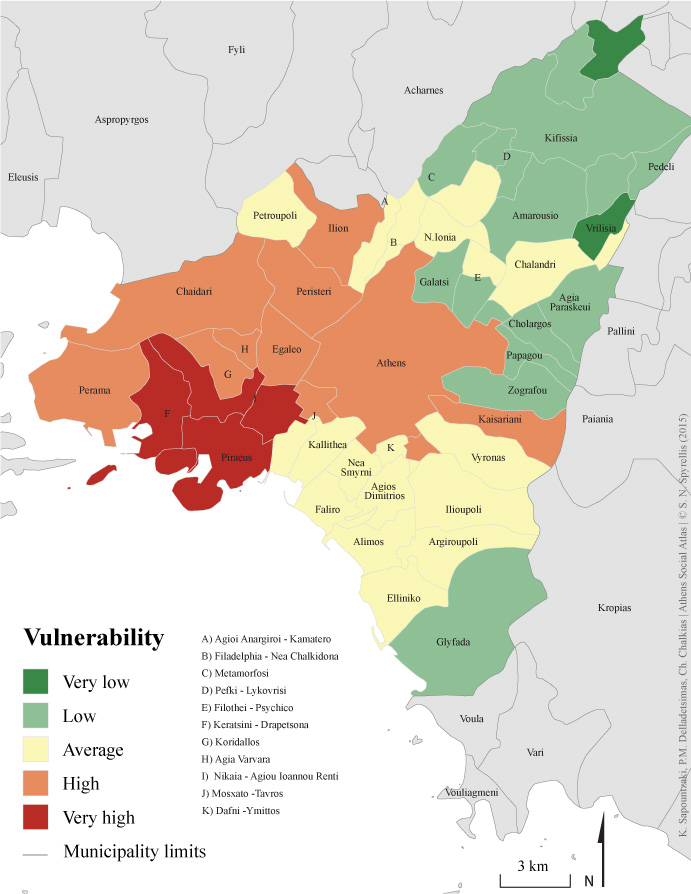 Map 4: Rating of pre-crisis Composite/Cumulative Vulnerability in the municipalities of Athens Metropolitan Area.

In fact, the economic crisis aggravated all critical factors in human and social vulnerability against natural hazards: social exclusion, poverty, unemployment, energy poverty, food safety, access to healthcare and care for the elderly. The worst aspect of this outcome is the increase and rapid expansion of social groups and areas that suffered multiple additional adversities and were exposed to vulnerability-increasing factors simultaneously. For example, older people fell into poverty and lost access to healthcare simultaneously. These groups and areas will certainly be the first victims in a future natural disaster.

Losses from any natural disaster will be intensified by the increase of institutional vulnerability due to the crisis. Important civil protection and risk prevention organisations and institutions are in decay as they are losing staff, financial support, technical resources and skills. This is the result of mergers, funding cuts or the abolition of public institutions that used to play a crucial role in preventive protection, crisis management and post-disaster reconstruction. For example, funding cuts took place in organisations responsible for forest protection; these bodies used to cover the recruitment of seasonal fire fighters, supplied and maintained firefighting equipment, cleaned forests and opened the forest road network. However, what will suffer most due to the economic crisis is the prevention of natural hazards/disasters because “…the benefits from prevention cannot be immediately felt, as they are intended for disasters that never happened…” (Annan 1999).