Operation “Xenios Zeus”: A strategy for deterring immigration through detention, intimidation and violation of migrants’ rights

The immigration policies implemented in Greece for the past twenty years are, in their great majority, repressive. Initially, in the 1990s, numerous Albanians were arrested and deported due to the political circumstances at that time, while in the 2000s migrants from Africa, the Middle East and Asia who entered the country illegally were held en masse at the borders. In recent years, from 2010 to 2012, most arrests were mainly made at the border between Greece and Turkey, rather than in the mainland, while the means of border control were significantly reinforced. (Table 1)

The border police was created in the 1990s and police stations with detention facilities were built in the Prefecture of Evros. In the mid 2000s detention centres were built in Samos and Chios. As of 2007, Frontex coordinates operation “Poseidon” in the Aegean and since 2011 the operation “Rabbit” covers the land borders of Thrace. In 2010, Thrace became the main border control point and assumed a symbolic significance in the “problem” of border crossings towards Greece in a context of mass arrests, both at a national and European level. However, the situation changed radically after 2012, for two main reasons: the implementation of Law 3907/2011 and the “Xenios Zeus” operations.

The adaptation of Greek legislation to the provisions of the European Directive on “returning illegally staying third-country nationals” paved the way for new border control methods and institutional structures. In particular, it established an immigration control process aimed at simplifying and organising identification and data collection for those crossing the borders illegally. Indeed, as of the first semester of 2012, the implementation of the new law led to a significant acceleration of border control procedures for undocumented migrants [1]. Undocumented migrants bound to be deported were held in detention centres in Feres, Venna, Fylakio, Tychero and Soufli. In August 2012 and in parallel to the implementation of the new inspection methods in the land borders of Greece and Turkey, the government initiated the operation “Xenios Zeus” not in border areas, but in the country’s big urban centres. The large-scale controls were mainly focused on Athens and were predominantly aimed at migrants without legal documentation. They led to thousands of arrests and detentions [2]. After a stop and search inspection procedure migrants were taken to the police stations of Athens for identity checks. In case they did not possess a legal residence permit or held fake identity documents, migrants were arrested and held at the city’s police stations or were transferred to detention centres in Athens (pre-departure centre in Amygdaleza), Xanthi, Komotini, Paranesti and Corinth. The capacity of these new detention premises, inaugurated in 2012, was impressively higher than that of detention centres in the borders. In many cases, they can fit up to 1000 individuals.

Determining the exact number of migrants arrested and held requires a special calculation method. The numbers appearing in table 2 are produced following the addition of data provided in the daily reports of the Hellenic Police and are published on its official website. These numbers reflect migrants brought in for document inspections and include checks at the police station and arrests and detentions for “breaching national legislation regarding the stay in the country”.

The main social impact of the “Xenios Zeus” operations is related to the very character of the detention of migrants following their arrest. The expected duration of detention is never known, as it may legally reach 18 months, based on the amendments introduced in Law 3907/2011. In addition, pre-departure detention centres were insufficiently linked to migrant support networks, which provide legal and, in some cases, medical services. In other words, contact with the “outside world” is scarce, while some undocumented migrant detainees were transferred and held for months in police stations in central Athens prior to their transfer to a detention centre (Map 1). 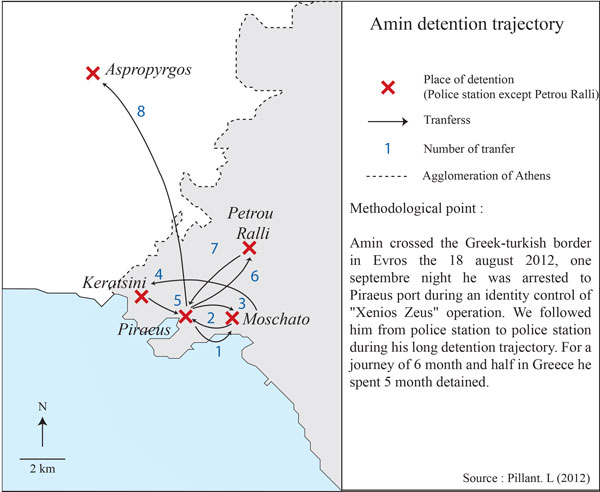 Another major impact of control operations in the context of the implementation of Law 3907/2011, is the “expansion” of the practice of detention from border regions to the mainland. The geographical “expansion” of detentions to urban centres was accompanied by general statements by the authorities about the suppression of immigration flows and of migrants living in cities, mainly in Athens. Thus “Xenios Zeus” operations mainly led to a reduction in arrests at the borders and the increase of arrests in large urban centres. Within the cities and not in some faraway and invisible borders, the “Xenios Zeus” operations increased the “visibility” of arrests and exploited migrant suppression for communication purposes. Especially in Athens, the city where a little more than 1/3 of the country’s population lives, the “visibility” of arrests had a special power in terms of communication (Map 2). 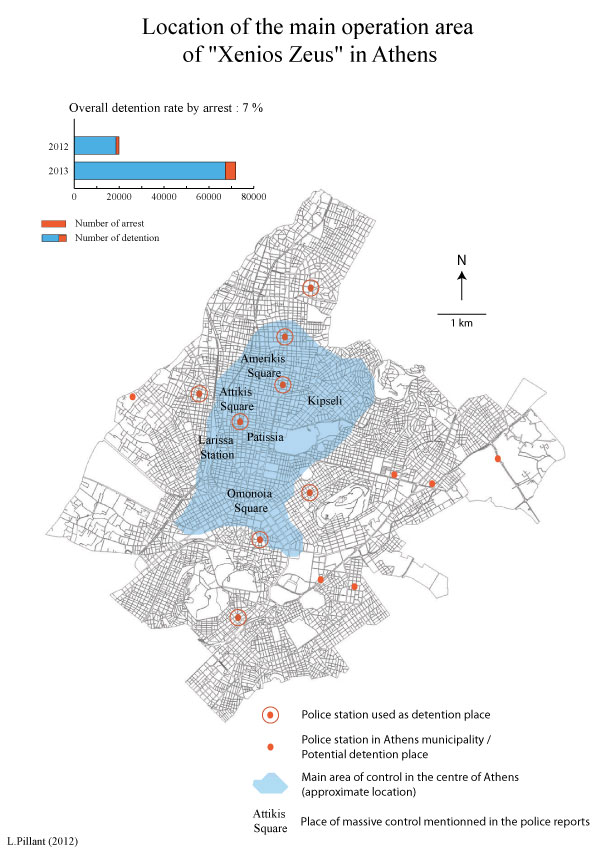 Other than the benefits that certain operations brought to the political powers, in the eyes of a population with a negative view of foreigners, the “visibility” of the arrests caused widespread fear towards the Greek Authorities within the migrant communities too. In the same period, the risk of being arrested was compounded by the increasing risk of racist attacks against them, especially in big cities. All that indirectly discouraged those aiming to cross the border from Turkey to Greece, as shown by the abrupt decrease in arrests at the border of the two countries after August 2012. This situation changed of course radiacally with the new refugee crisis related to the war in Syria.

In the light of those observations, there is no doubt that the specific operations had significantly negative impacts for migrants in Greece. The Authorities patently used scare and prevention tactics against migrants living in Athens or wishing to remain in the country without legal documents. When analysing the new control strategies, it is important to take into account the method of diffuse detention. Undocumented migrants were held not only in “invisible” border areas but also in the centre of Athens and of other big cities. The control “routes” of undocumented migrants involved multiple stops in detention centres and police stations, in border areas and in the heart of cities.

[1] The acceleration of border control procedures was attested through a field survey at the Municipality of Evros, from May until August 2012, as part of the author’s PhD research.