Abandoned buildings and vacant shops: The spatial pattern of the crisis

Local trade by SMEs is one of the sectors that suffered a heavy blow , after 2010, in many outer and central neighbourhoods of Greek cities (and Athens in particular), due to the economic crisis.

In studies commissioned by Chambers of Commerce and in the bulletins of the Statistical Authority one notes an increasing decline of commercial activity in Athens and Piraeus, the key features of which are a gradual increase in the number of vacant business premises and a continuous drop in the turnover of small retail businesses. The same picture is also portrayed in the Press, which often exaggerates, presenting the commercial centres of the two cities as “destroyed zones”. The interpretations of this crisis of small retailers, were mainly based on prevailing stereotypes, attributing it to increased delinquency, insecurity, the presence of immigrant street vendors and political demonstrations.

The long-term abandonment of public spaces in the centre of the capital, after the impressive renaissance of 2004 and the boom and bust of the real estate market, led to a huge stock of vacant buildings, generating “black holes” in central urban areas. This was combined with the permanent obsolescence of listed buildings that were already abandoned.

The study and systematic recording of the problem of vacant business premises in representative neighbourhoods and central street sections in Athens and Piraeus offered a detailed and complex description of shrinkage trends. It therefore highlighted crucial variations depending on the type of commercial activity, geography and the intensity of the phenomenon. The data for 2010-2013 allowed this research to focus on parts of Kypseli, Vathis Square, Metaxourgeio, Exarchia, Koukaki and the Centre of Piraeus.

The findings show interesting variations in the patterns of vacancy. Overall, we observe a huge percentage of vacant premises, ranging from 25% to 50% of the total stock. Two types of trade showed resilience: wholesale by immigrants, which also positively affects neighbouring trade by natives, and cheap bric-a-brac. On the contrary, retail stores located in expensive streets, selling apparel, luxury goods, vehicles etc. which developed in the prosperous times around 2000-2004, have mostly disappeared. Various fluctuations can also be observed between main and secondary roads. 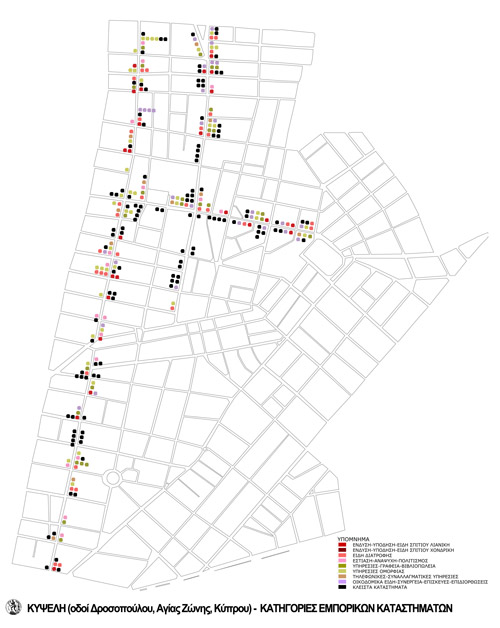 A critical element for commercial activity in Kypseli is the participation of immigrants, which ranges from 10% in Agia Zoni to 25% in Drosopoulou Street. Native run and immigrant run shops were equally affected. The percentage of vacant premises ranged from 25% to 35%, depending on the location.

In the area of Vathis Square and Agios Pavlos, vacant premises are the norm. This picture, combined with abandoned neoclassical listed buildings, vacant office and apartment blocks and abandoned plots, create a sense of desolation. However, this region preserves its multifunctional character to a large extent. A large part of the area is covered by residences and many shops, especially in main streets and around Agios Pavlos Square. 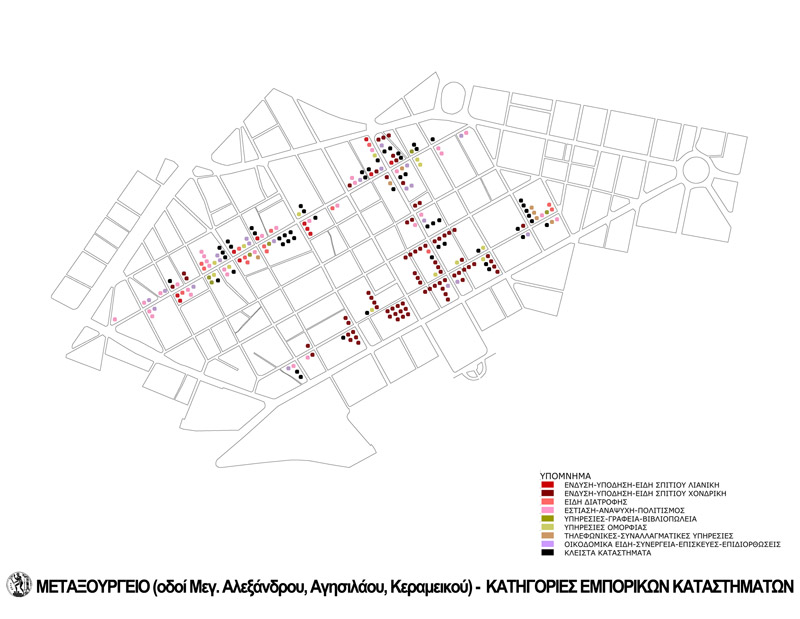 In the main commercial streets of Metaxourgeio, the 23% vacancy rate is lower than the average for the centre of Athens. The smallest rate of vacant premises is to be found on Agisilaou Street, where there are mainly wholesalers, a commercial activity with greater resilience, although they appeared in the area just over the last fifteen years. In the case of Metaxourgeio, immigrant shops prevail, although with geographic variations. Most immigrant-run shops are located on Kolokynthous and Agisilaou streets. In both streets, Chinese shopkeepers mainly operate in wholesale and they attracted some 40 similar businesses by Greek shopkeepers after 2009. 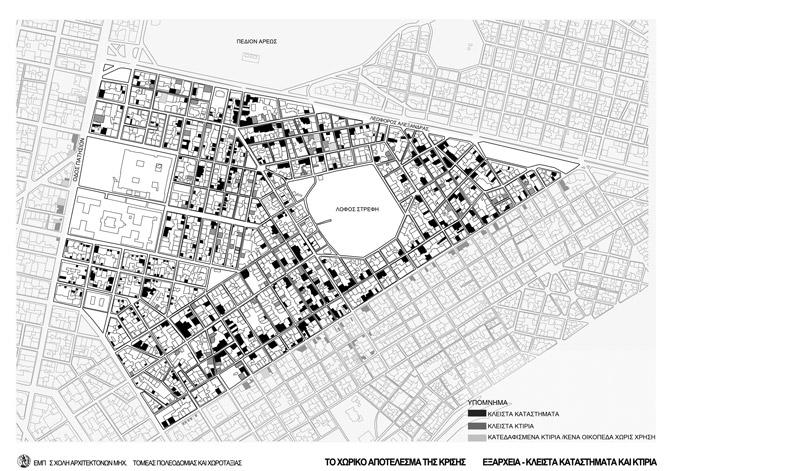 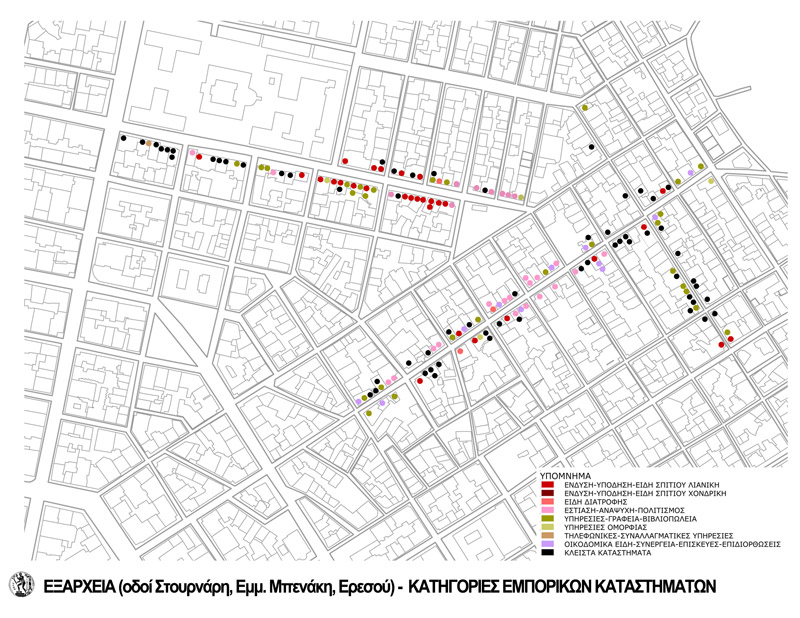 The area of Exarchia has 453 vacant ground-floor premises, 86 vacant buildings, mainly single-storey and two-storey and 21 vacant plots (2012 data). Closed or abandoned buildings, mostly neoclassical houses, are evidence of a previous crisis and other problems, not directly related to the current crisis. The updated records (of 2013) identified 467 vacant premises , mainly in the area’s commercial streets. This acconts for 43% of the total stock.

Different types of premises are equally affected while, in geographical terms, there are fewer “shut-downs” in more central streets. The vacancy rate in Exarchia is similar to that of other commercial streets and areas of central Athens, thus refuting the dominant perception of the area as a “riot and delinquency hotspot”.

The survey also shows that supralocal and specialised (book, publishing, music, design products) shops, which are typical of the area, are decreasing, but still have a significant presence. 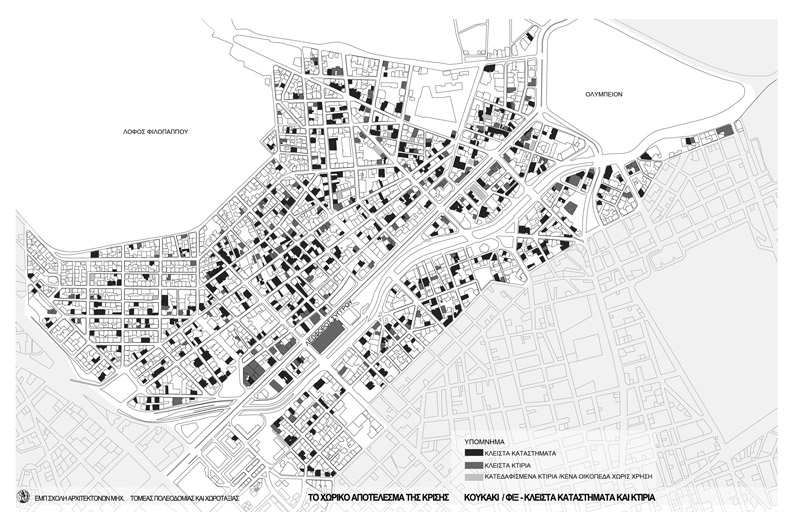 Koukaki is one of the areas of Athens that does not share many of the characteristics related to the centre’s degradation. The area has good accessibility to public transport (tram, underground and buses) and is near the archaeological sites zone, the Herodes Atticus Odeon and the Acropolis Museum.

However, across Koukaki, there are 375 vacant ground-floor premises and 156 unused buildings (2011 data). Vacant ground-floor premises and buildings are mainly found in the area’s most commercial streets, at rates between 30-45%. Tellingly, on Syggrou Avenue, boasting multi-storey office and business premises, the ground floor is available to rent in 54% of the buildings, while 29% of the building stock is completely vacant or used minimally. This collapse was partly the result of the depression of the car market, which used to flourish on Syggrou Avenue. 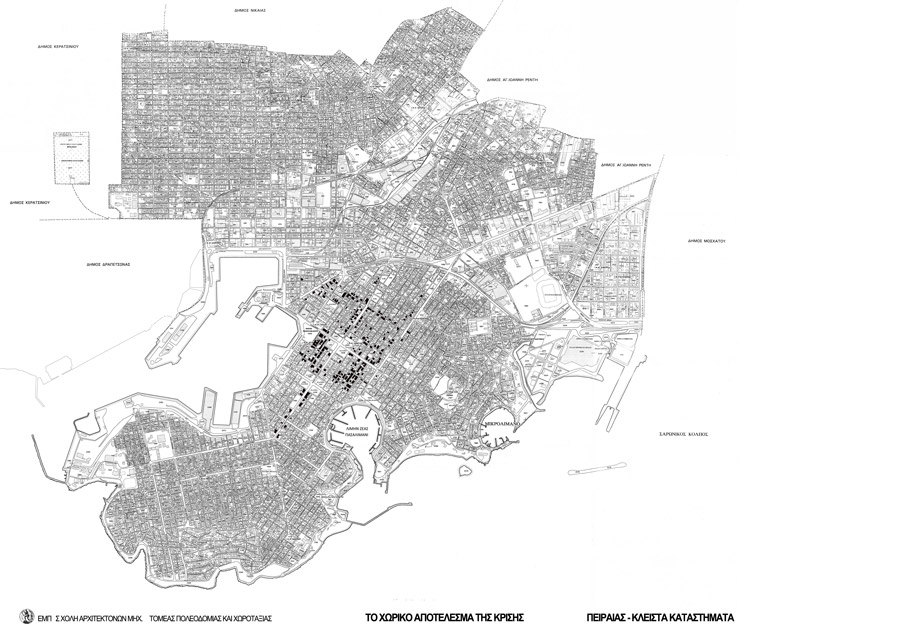 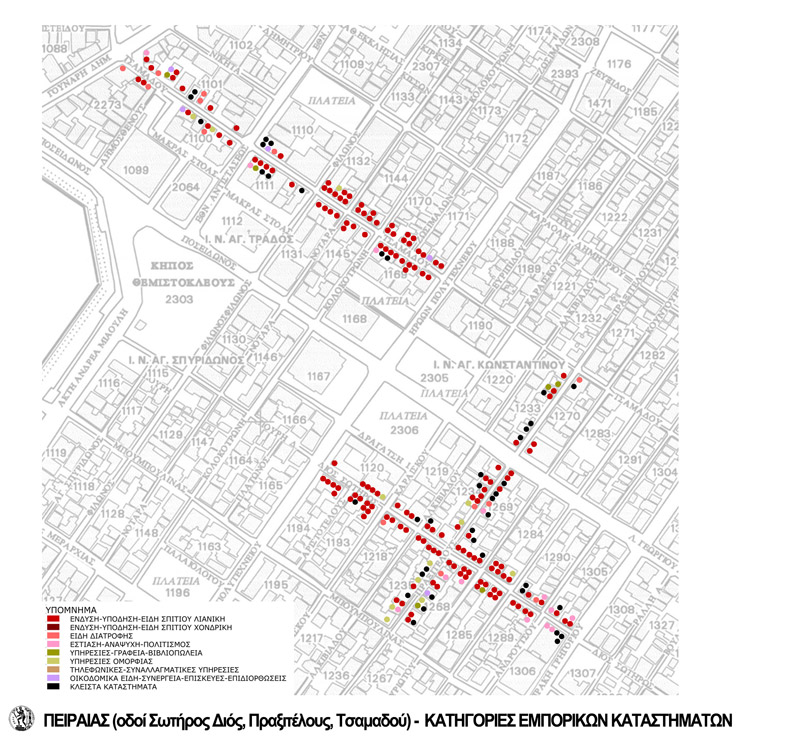 There are 315 vacant premises in the centre of Piraeus (2012 data). In the main shopping streets, vacant premises account for around 16% of total, much lower than vacancy rates in central Athens. We notice that different types of shops are equally affected, while, in geographical, terms there are fewer “shut-downs” in more central streets.

In the centre of Piraeus, we observe that “traditional” low-end trade still stands, unlike the high-end trade in apparel and luxury goods, which developed around 2000-2004. Retail shops for apparel disappear , while catering and leisure businesses spread.