Property transformations in the centre of Athens during the economic crisis years (2009-2018). The case of Exarcheia.

Since 2009, when the global economic crisis was “transferred” to Greece and the local economy weaknesses have surfaced, the property market began to “freeze”. In the center of Athens, businesses were shutting down and the living conditions deteriorated. Simultaneously, Athens center became a place of protests, conflict and riots.

In Exarcheia the atmosphere was already tensed, as an important event had preceded: the murder of school student A. Grigoropoulos by a police officer in December 2008. During most of the economic crisis’ decade, continuous clashes between the police and anarchists, the wanton destructions of private and public property, as well as the presence of drug dealing in this area, dominated the public debate, locally or beyond Greek borders, about Exarcheia,

However, few years after the outbreak of the crisis, the scenery started to change, due to three interconnected processes. Since 2014, the increase of tourist flows towards Athens, as the city became rapidly a city break destination. The growth of Airbnb, that spread aggressively in the whole city center (and additionally of the Golden Visa, with the latter having less intense impact on the local real estate market). Lastly, the fact that Athens emerged as an “investment opportunity” in the global real estate markets, mainly due to the very low real estate prices following years of economic recession. These developments started to have visible impacts in Exarcheia in 2015, and more intensively in 2017-2018, when local and international capital investments expanded their presence in Athens’ city center.

To investigate the effect of all these above interconnected dynamics on the local real estate market, the broader area of Exarcheia was chosen as a study case. Considering that urban dynamics are not limited by administrative borders, a buffer zone around the official boundaries of Exarcheia was selected. The zone concerned 227 blocks that are delimited by Patision, Panepistimiou, Alexandras and Ippokratous avenues and include: the neighborhoods of Exarcheia, Mouseio, Strefi hill, a part of Neapoli and a small part of the Athens’ historical center (map 1). 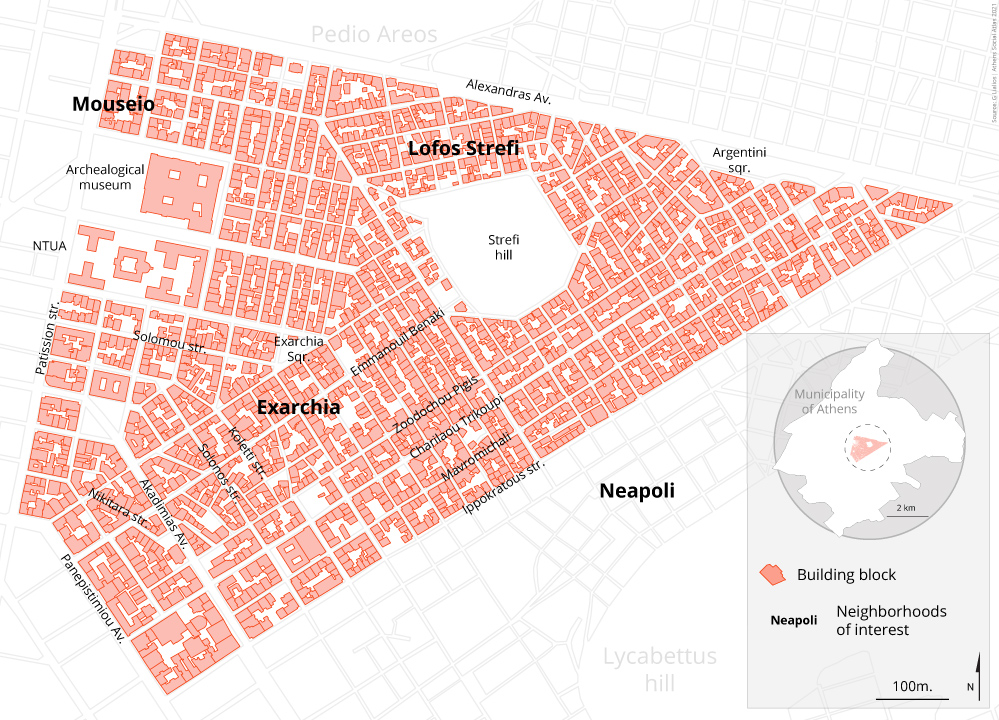 Regarding the spatial distribution, the transactions were scattered in the whole area of study. Real estate transactions happened on almost every street in the studied area, during 2009-2018. Market interest have clustered, without being limited, along main streets, in areas with higher presence of office buildings:

Considerable number of transactions was also located at Benaki, Koletti, Nikitara, Solomou and Solonos streets. It should be noted though, that the property transactions along the boundaries of the study area (parts of Alexandras, Panepistimiou and Patision – all main streets) were fewer than those along secondary streets of the area (map 2). 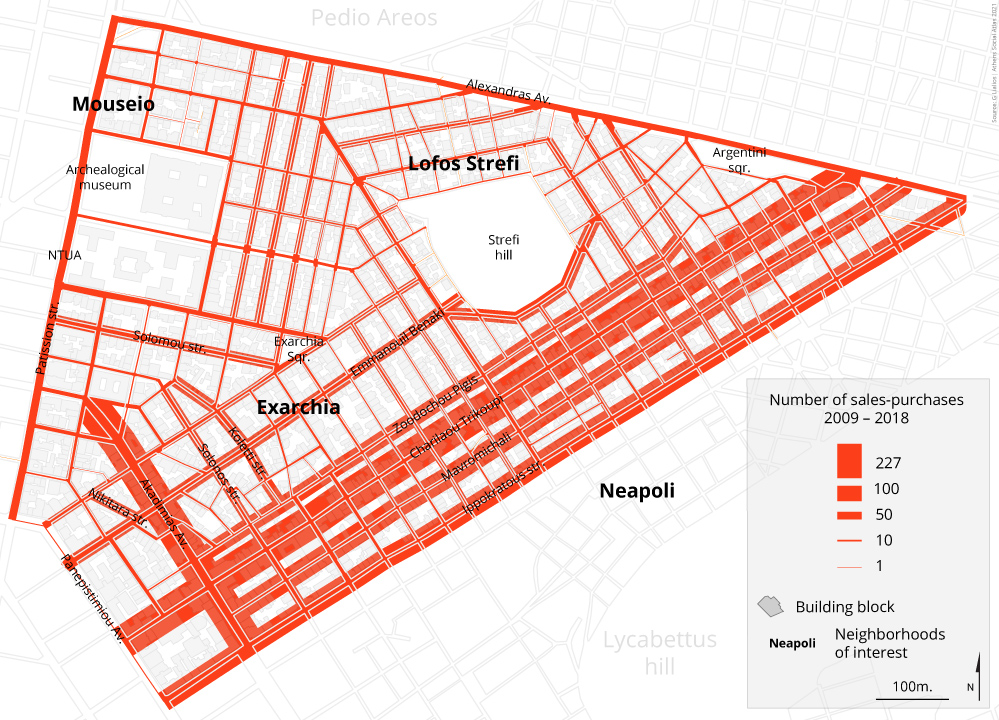 On the contrary, transactions of office spaces, that represent the second largest category of properties sold during the crisis decade, remained even in 2017 and 2018 and at lower levels compared to the ones in 2009. The small number of sales of commercial spaces echoes/reflects the general economic recession, considering also the large number of shut down shops and businesses during the same period in the center of Athens and Exarcheia in particular (table 1, maps 4-8). 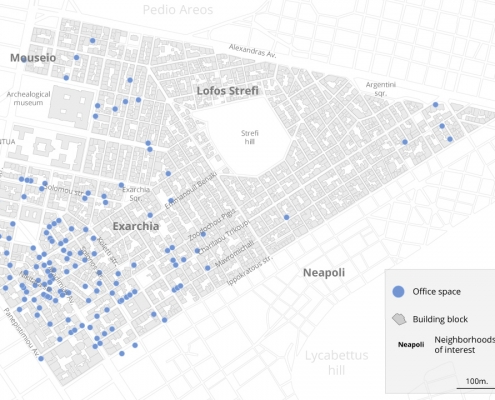 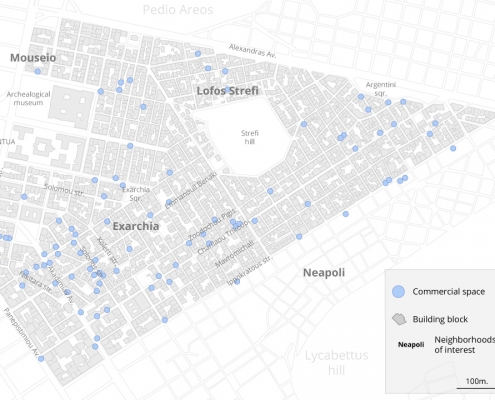 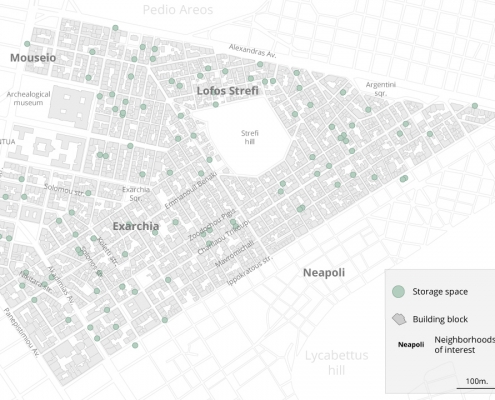 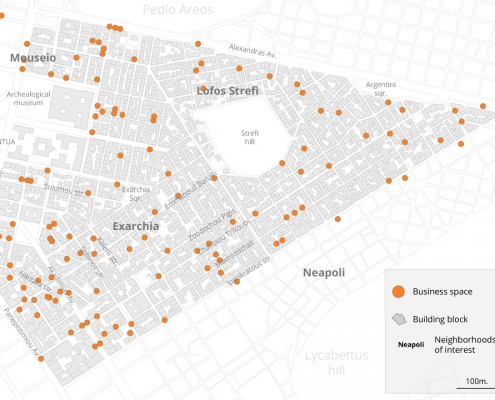 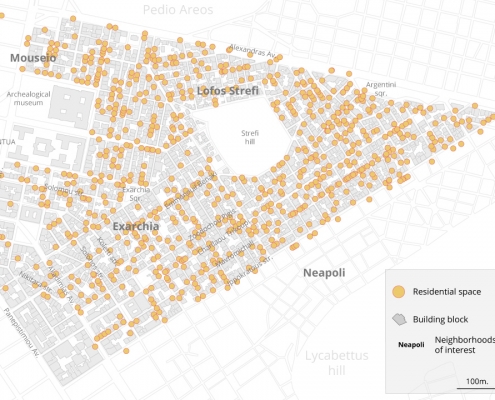 During the examined decade, sold properties in the study area reached at total of 90.000 m2. The average property size was 53,67 m2. The yearly distribution of the mean property size shows almost no size variation- which is linked to the lack of larger properties in the area and reflects its (middle class or student) residential character (table 2).

Table 3: Purchase of property rights per percentage of ownership

The rest of the cases concerned co-ownership and involved various ownership percentages, starting even from 1% (obviously in those cases the property was bought together with other people or companies). There have also been cases that concerned the sale only of a percentage of the property. In these cases, the most probable scenario is that that someone’s share in a property was bought off by the other owners of the same property.

As it turns out (table 4, graph 2), Greeks have dominated property sales in the area during the whole decade, reaching the lowest point in 2014 and returning to the levels of 2011 by 2018.

Table 5: Number of property purchases by legal entities per year

Regarding the ownership percentage bought, 407 of legal entities (90% of total) acquired a whole property, and the rest smaller percentages. In one case, a company acquired 15% of 31 properties in the same building.

Concerning the type of legal entities involved, most of them (33) were As for their business sector, most of them were investment, real estate and leasing companies.

However, not all legal entities were companies. Among those recorded were social security funds, (business) chambers, associations, organizations or the church. Most of those actors bought only one property.

This finding clearly points at the dramatic weakening of the locals’ purchasing power, and the growing number of foreigners (and companies as well) looking for deals in a promising real estate market and purchasing properties in Exarcheia.

Table 6: Number of property purchases by natural persons per year

Another interesting finding is that there was no property consentration, as most natural persons (61,6%) bought only one property (a total of 1.660 property rights). Only 1,3% bought 5 property rights (table 6).

During 2009-2018, people from 42 countries bought properties in Exarcheia (table 7). In the Land Registry database foreigners were recorded as non-Greeks – the place of permanent residence was not examined as in todays globalized environment it does not have a decisive force. In this context, people with Greek names, that are citizens of other countries (Greek diaspora) were categorized as foreigners.

Table 7: Number of property purchases by foreign citizens and number of buyers by nationality (2009-2018)

The analysis of the sale contracts based on the nationality of the new buyers (table 7) confirms the general belief that Israeli (at a larger extent) and Chinese (at a lesser extent) were among the nationality groups involved in an important number of transactions . The second largest nationality group (after the Israelis) was unexpected: Albanians. A number of buyers were also from France and Cyprus. In general, half the foreign buyers were nationals of four main countries (Israel, Albania, France, Cyprus). 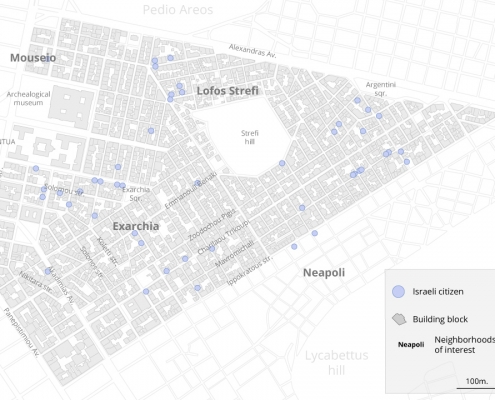 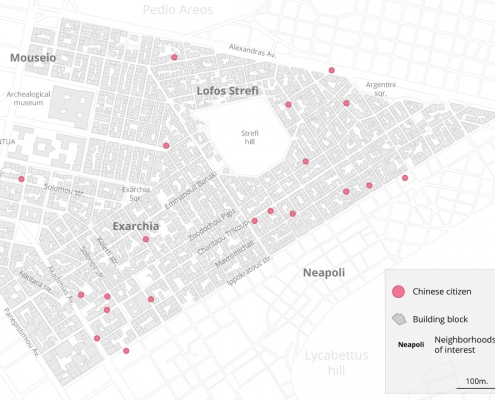 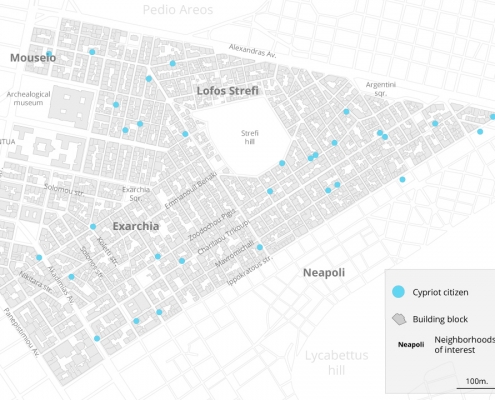 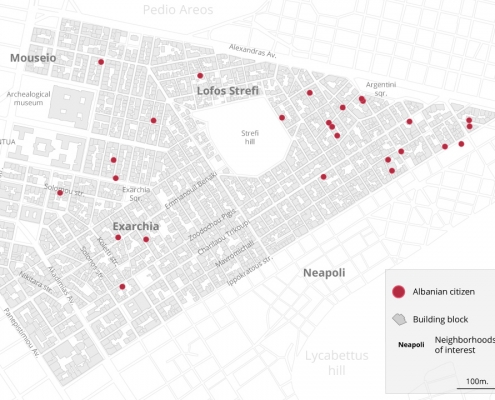 Maps 9-12: Location of sales and purchases per buyer nationality

As for the number of properties acquired by non-Greek nationals (table 6), Israelis remain at the top of the list, with 74 properties in the broader Exarcheia area (16,2% of all sales by foreigners). Chinese nationals are in second place, with 52 properties, together with Cypriots. Albanians are in fourth place, with 42 properties, followed by the French (39 properties) and Turks (29 properties). Generally speaking/In general, about half of all properties (47,9%) bought by foreigners, were bought by people from 4 countries (Israel, Cyprus, China and Albania).

The analysis of all sale contracts concluded during the economic crisis and for assets in Exarcheia reveals that a large number of the properties bought, especially after 2015 moved form long term to short term rentals. This conclusion emerges indirectly (from the rising number of Airbnb listings and reports on long term rentals rise up to 30-35% in 2018) but also directly from the findings of this research. As this study shows purchases concern also whole buildings which have been transformed into hotels. Additionally, new buyers concerned often individuals or companies involved in the hospitality sector. The statues of companies buying properties in Exacheia clearly stated that their purpose is managing and short-term renting properties.

The image of decadence associated with Exarcheia during the economic crisis in the public debate seems to have helped, if not fostered, real estate speculation. The consecutive clashes with police forces, the destruction of public and private property and drug dealing, have all supported this image and surely discouraged new residents form moving in Exarcheia. At the same time, those events had a negative effect on the permanent residents, with some of them moving away, as a consequence of the area’s degradation and criminality. The price decline, centrality and the youthful, revolutionary, and alternative character of this particular area (promoted as being part of a “travelling experience” recently), have initially encouraged sales in Exarcheia. However, it remains unknown to what extent the promoted negative image of Exarcheia (the portrayal of Exarcheia as a no-go zone, where anarchy and drugs rule), has been entwined with other political or economic motives aimed at first pushing down property prices and subsequently “normalize” the area through real estate development. This question may be easy to assume but difficult to prove. Undoubtedly, the real estate capital looks forward to this “normalization” by investing in properties and short-term rentals, as long as this does not change this areas’ “branded” character. In any case, it is very interesting that an area portrayed in the public debate as a no-go zone is directly targeted by local and foreign capital, to the extent that shows signs of gentrification.

About the Airbnb and the golden visa

About the Exarcheia neighbourhood