Tracing Liminalities: In the Limits of the Archaeological Sites of Athens

This project entitled “Tracing Liminalities: In the limits of the archaeological sites of Athens”, is an implementation of ethnographic methods (participant observation, interviews, archival material) and creative photography for the production of an artwork. Even though creative photography is not a scientific medium, its contribution when combined with interdisciplinary ethnographic methods, is irreplaceable and unique, because its results impart tacit knowledge, as it contains lived experience.

In its core are the liminal spaces that are to be found between the differing temporalities of the ‘archaeological’ and the ‘contemporary’, between the marked and marketed sites of archaeological study of the city of Athens and its unmarked everyday outsides. Through several case studies and drawing upon lens-based art (photography) and ethnographic (discursive) methodologies, the spaces under investigation are approached as a uniquely signifying ‘borderline-research field’: by systematically re-photographing traces of material cultures, over a period of five years, and by de-coding a series of interviews with those who come to inhabit their spaces, a momentary human geography of the ‘liminal’ can be glimpsed.

In the project the objects tracked tell us little stories of sociopolitical situations as revealed in the daily practice. The micro-landscapes photographed, cut off from their so heavily signified environments, narrate stories that reveal behaviors, tactics, and in consequence, elements of contemporary cultural status, filled with signs that herald the impending “crisis”.

However, the ‘evidence’ gathered here cannot be claimed as ‘documentary’. Rather, a third space of constructed visualities of lived experience is opened up, together with the figure of the researcher herself. At the same time, a new, visually-discursive result has been created, one that was never before perceived or viewed.

At the boundaries of archaeological sites

While searching for the appropriate point of observation for this field research on Athens, I moved both “in” and “off” limits. The right location for this fieldwork could not be among the glorious, precious, sacred ruins, nor could it be in the contemporary city itself. It would certainly have to be somewhere far from “the aestheticised nostalgia of the commonplace” Peter Eisenman (1988). Rather somewhere in-between, where the edges of the archaeological sites meet with the modern city.

There, where the ancient and the modern city coincide, the everyday life and activities of the people contrast with the different atmosphere, the institutionalised calm of the open-air archaeological sites that operate as tourist attractions. The interesting thing when moving on the edge, is that even if you want to, you can’t stop your gaze from confronting the contrasts and contradictions, both cultural and ideological. The synthesis of these various elements of otherness in these zones, could help in the exploration of our constantly changing identity, and we may then begin to see the big picture. If we are to examine the hybrid state of our contemporary identity, the crucial question to ask would not be “who am I?”, but, “when –where –how am I?” as the ethnographer Trinh T. Minh-ha (1992) has so accurately pointed out. As a result, there is no point in self-determination simply by stating who we are, but instead in constantly specifying the “when-where-how” we are.

Trying to find this “when –where –how I am” I began taking photos back in 2003, following a certain trajectory in the symbolic and physical boundaries of certain archaeological sites in Athens. The photographs function as a memory archive of the changes and of my findings. I became intrigued to investigate visually, how these sites are kept restricted, and what happens to the public space -usually pedestrian paths- that surround them. Also what is opposite them and how the modern city “mirrors them”. 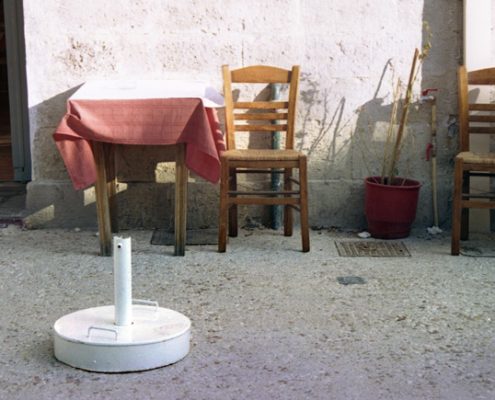 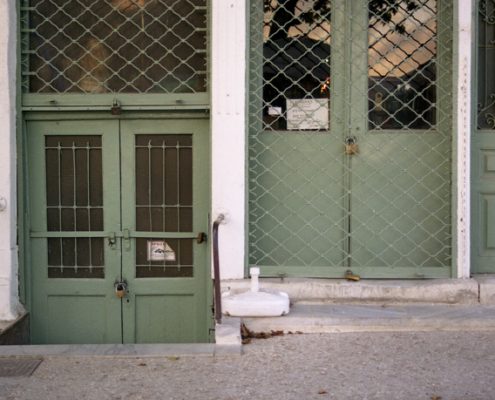 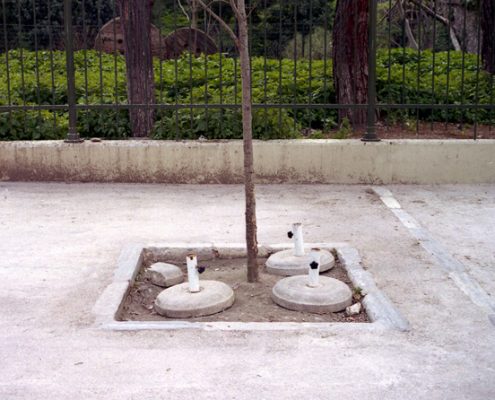 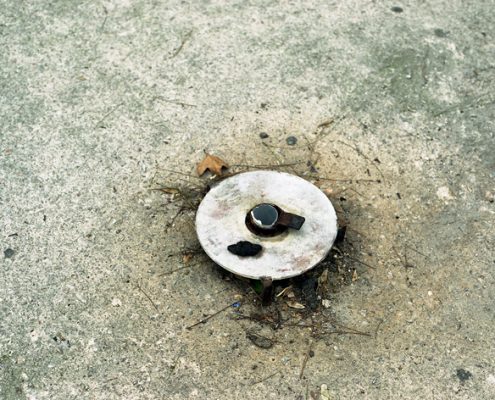 Figure 2: The city of solitary chairs 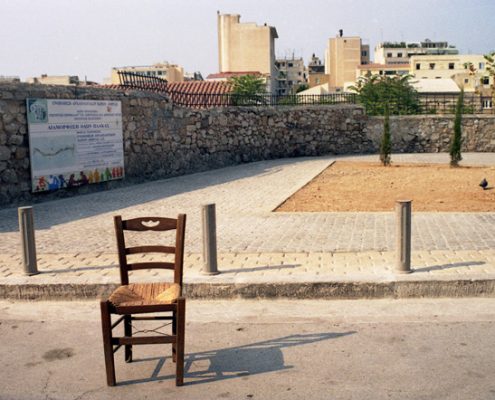 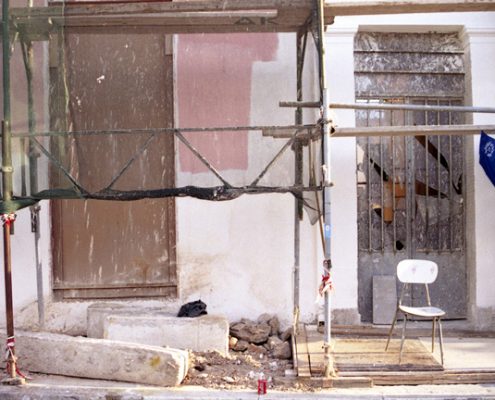 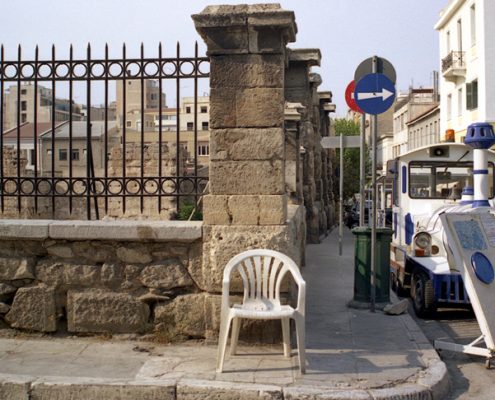 Figure 3: Who are the guardians of the contemporary city? That woman is always outside Adrian’s Library 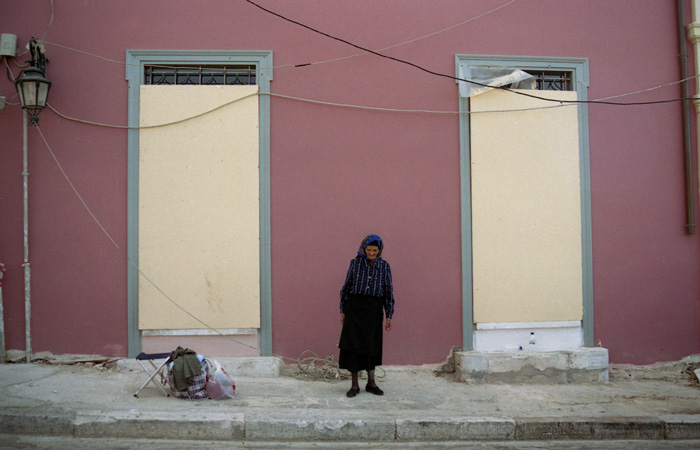 These first findings in my photos were not enough. Indeed, I had to find another way. I continued rephotographing systematically everything at both sides of these trajectories for six years, over regular periods of time focusing more on a kind of visual microethnography.

“Ethnography is the study of both explicit and tacit cultural knowledge” says Spradley (1980: 8) so, through this exploration, I was after both. Explicit knowledge was my raw material, my theoretical point of departure. Tacit knowledge that remains largely outside people’s awareness, is not expressed consciously and cannot be discussed, was my theme; my own task was to experience it, to get the feel of it. Becoming aware of this tacit knowledge came to form and shape my view, either as an insider or an outsider. 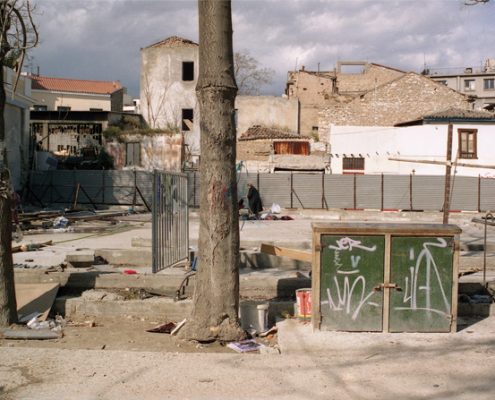 Note the woman at the back that is searching for clothes 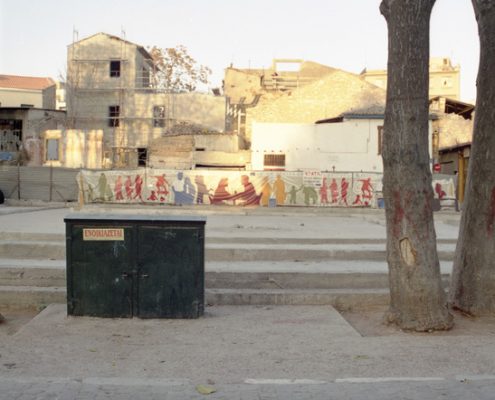 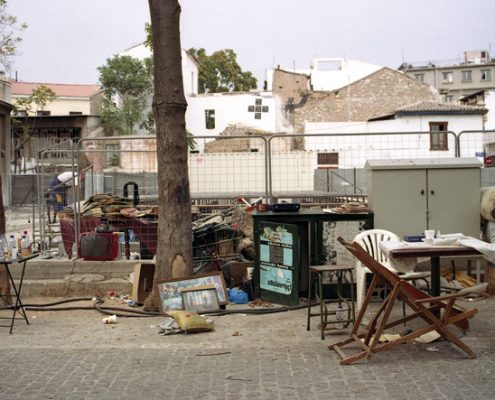 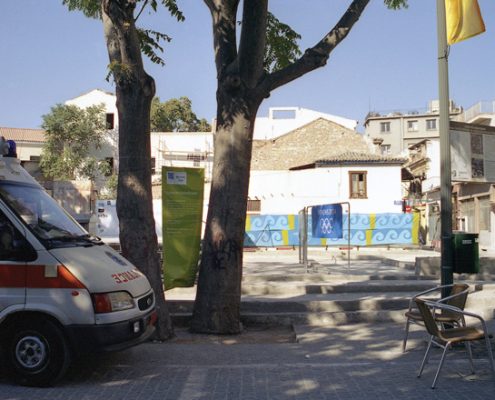 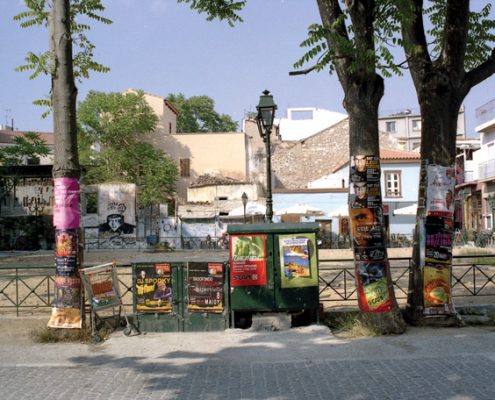 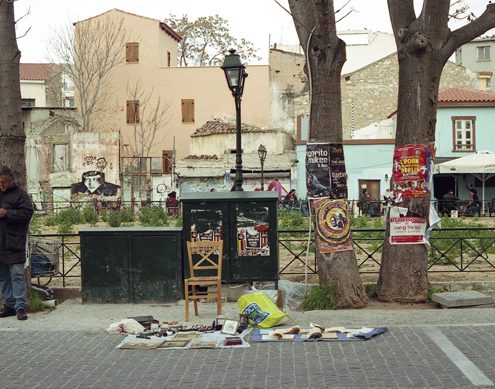 What exactly does it mean that a city is changing? By putting one photo next to another I noticed that in some places stories were unfolding in a more interesting way for my aesthetics, I began to see in the photos things that I couldn’t see with my bare eyes in the field at the time I was photographing them.

Figure 5: The adventures of a lamppost

Figure 6: Neoclassical building situated opposite the Tower of “Aerides” of Roman Agora

This is a house situated across the archaeological site of Roman Agora opposite the tower of “Aerides”.

But the answers to the questions I asked were not the object of my inquiry… What they thought of the project to unify the archaeological sites of Athens? What brought all those different people here? Are the owners of the cafes trespassing by overtaking the public space? How do they feel about the graffiti in the antiquities? Why so many drugs in the area? What is the State’s role in all this? Finally, if they think modern Greeks (Neoellines) bear any resemblance or relate in any way to the ancient Greeks?…The photographs are cut off from their broader analytic frame and their visual surroundings (antiquity, archaeology, glorious past, cultural heritage etc). They make an effort to reach their “readers” with their symbolic representation of the Other’s reality (the other in this case being the modern Greeks’ mentality). With time, themes began to develop, so I started doing some interviews. In total twenty five interviews, with people who come to inhabit these spaces, a momentary human geography of the ‘liminal’ can be glimpsed.

The real discovery though came from other things that people “confessed”. I felt that something was still missing in the visual results already gathered … The images of the people interviewed and their stories haunted me so they had to become a part of the work. They had to be re-situated in the place they belonged to: the place that – without them knowing- was chosen for them by me when they narrated their stories.

To realize that this simple payphone that I was photographing all this time could play such a role in a person’s life was way beyond my imagination… and it was a shock to think that a homeless Belgian man of 65 years took the bus to go to a University that is a long way out of the centre of Athens, just to be helpful to the tourists. All the stereotypes about homeless “marginalized” people disappeared.

The interviews made the photos vivid with their subjective narrations, at times dominant, at times marginal. An attempt for an ethnographic inventory of partial truths or mental realities that is constantly being enriched but never complete in itself. The result is that the personal stories become entwined with collective history. The narration of a person could become the palimpsest of the histories of many other everyday people, permitting what Stuart Hall mentions as the creation of “another visual language, one which is rooted in both the reality of lived experience and incisive articulation of that experience” (Hall 1983:17 in Edwards 1999, 74).

By triggering this event the result is a visual parathesis (lining up) of differing temporalities that all appear in the same picture and narrate a different tune to the one expressed by each photo or interview separately. A constructed visuality, one never before encountered per se. It is an effort to depict not the landscape, but rather the lived experiences of the landscape. Whatever happens outside the arcaeological sites is inevitably at a constant dialogue with the «institutionalized», the forbiden, in many cases wide shut out of the historical knowledge and heritage of the official State.

After this visual/ethnographic intervention things are not left as they were before, at least not for the ones that shared the experience of its readings. That is how the photograph can become a device which communicates the unseen, the implicit /tacit knowledge and translate it into what W.J.T. Mitchell (2017) describes as “something that looks like a picture of something we could never see” or what Victor Burgin (1996:272) describes as “a cultural experience” that translates the unconscious into consciousness.

Everyday people describe this situation as problematic, as a crisis and degradation. In the pictures and narrations included in “Tracing liminalities” the destruction, the void and the disintegration is often pictured, but not viewed as something to be judged or denounced but rather as a creative phase which signals the underlying change. It is pictured as a series of symbols and innuendos echoing the way we experience the social, political, cultural and economic situation deep in ourselves. The “rock bottom” phase can be used as a tool for re-emerging to the surface, an incentive to examine what went wrong, how it can be overcome and left behind, as a kind of therapy for repeated mistakes. By passing through the imaginary boundaries between the primordial past and the present place of origin, without the “polarized oppositional models” of the intellectual world, one gains the much desired awareness. This ethnographic – art project could make my subjective and fragmented “truth”, my traumatic lived experience about contemporary Greek reality, more bearable. And indeed the intimacy with the people added an “aura of authenticity” that made the ugly truths more palatable. The everyday stories of the people, evolving alongside the seemingly unimportant stories of the material world that surrounds the heavily signified, historical sites of Athens – passing unoticed for this very reason – are now depicted next to one another. The objects represented could be the “traps” that will make us give new content to the old stereotype that we had as far as archaological sites are concerned and will make them less “official” and more humane sites.

But at the same time, this project was a quest for a glimmer of light in a dark world: some evidence of hope and resistance to all of the above, to all that disappoints us in this city. The break with the modernistic, idealised icon of our past and the alternative almost impudent reading of the precious historic landscape could be the healing tool as Edgar Morin (Le Goff, 1998) proposes. A tool for adapting to change, a tool of accession to today’s reality that opens up prospects for the future (Spradley, 1980:8). Hopefully some of these photographic works will succeed in evoking the klafsigelos of the ancient Greek tragedy as a response. The feeling of katharsis that comes when we are finally caught up face to face with the “truth” that makes us cry and laugh at the same time.

Six works – part of a greater body of twenty five works – 70x100cm each, where the portrait along with the interview of each person is juxtaposed to the outcome of re-photographing a micro-landscape lying near the site of the interview

Figure 11a: In the limits of the archaeological sites: A’ Athens. Adrianou street, in front of Pikili Stoa, Plaka

Figure 12b:  In the limits of the archaeological sites: A’ Athens. Along Adrianou street, Ancient Agora, Plaka